Earlier, West Indies batting woes continued as they lost both their openers Chris Gayle and Dwayne Smith inside the first ten overs of the Match 10 of ICC Cricket World Cup 2015 against Pakistan. 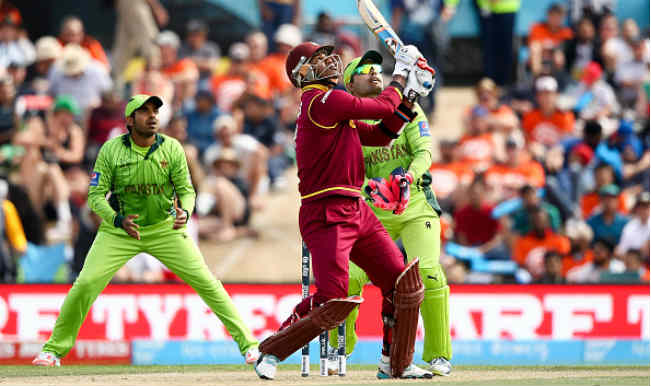 It is third wicket down for West Indies as they lost Marlon Samuels in the 25th over. The Match 10 of ICC Cricket World Cup 2015 between Pakistan and West Indies is well-balanced at the end of half West Indies innings. Indies were 103 when the prized wicket of Samuels fell. He was removed by Haris Sohail who introduced for his second spell. One can watch the full video highlights of Marlon Samuel’s dismissal on the official website of Star Sports here. It can also be viewed on icc-cricket.com here. Also Read - PK-W vs WI-W Dream11 Team Prediction, Fantasy Tips Pakistan Women vs West Indies Women 3rd ODI: Captain, Vice-Captain, Probable Playing 11s - Pakistan vs West Indies, Team News For Today's ODI at National Stadium 10:30 AM IST November 14 Sunday

The Jamaican was batting at well-made 38 when he tried to hit Sohail Khan, who was introduced again in the attack for a six but instead got a thick edge to give a simple catch to substitute fielder Yasir Shah. He charged down the ground to take Sohail Khan’s delivery buut failed miserably in clearing the boundary but ended up throwing his wicket. He departed in the first delivery of 25th over with these figures Marlon Samuels c sub (Yasir Shah) b Haris Sohail 38 (52b) SR: 73.07. Also Read - Year-Ender 2020: Suresh Raina Leaving CSK During IPL to Rohit Sharma Missing Australia Tour, Cricket Controversies of The Year

Earlier, West Indies batting woes continued as they lost both their openers Chris Gayle and Dwayne Smith inside the first ten overs of the Match 10 of ICC Cricket World Cup 2015 against Pakistan.