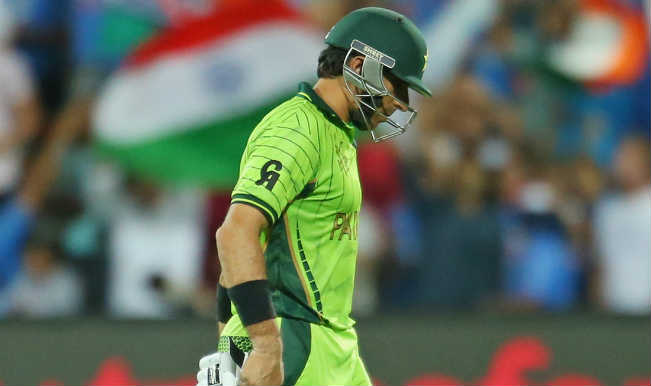 Watch the fall of wicket as Misbah ul Haq has been dismissed for 73 0ff 121 balls by Tendai Chatara in the Pakistan (PAK) vs Zimbabwe (ZIM), ICC Cricket World Cup 2015 match 23 at The Gabba, Brisbane on Sunday. Misbah kept holding the fort as wicket fell around him. Eventually, looking to up the ante he perished. You can watch video dismissal of Misbah ul Haq’s wicket here official website of Star Sports ie starsports.com here. Catch- Live ball-by-ball updates of PAKvZIM Match here Also Read - Wasim Akram Backs Babar Azam to Take Over Test Captaincy, Urges Him to be Assertive

It was Nasir Jamshed, who was the first wicket to go for Pakistan. Watch Watch video dismissal of Nasir Jamshed.  After him Ahmed Shehzad too was dismissed without troubling the scorers. Watch Watch video dismissal of Ahmed Shehzad. Both openers once again failed to contribute and Pakistan once again were in all sorts of trouble early on. Haris Sohail then had a partnership of 54 with Misbah, but Sohail was removed by Sikandar Raza in 21st over. You can watch video dismissal of Sohail here. Pakistan won the toss and opted to bat first. Younis Khan has been left out from the playing XI and fast bowler Rahat Ali has been included. Sarfarz Ahmed continues warm the bench as Umar Akmal will keep wickets. Pakistan have lost both matches and are bottom placed on points table in Group B. Also Read - PAK vs ZIM Dream11 Team Prediction And Tips, 1st T20I: Captain, Vice-Captain, Fantasy Playing Tips, Probable XIs For Today's Pakistan vs Zimbabwe 2020 Series at Rawalpindi Cricket Stadium 4:00 PM IST November 7 Saturday