Earlier, an all-round batting performance from the West Indies helped them to 310 for six in their World Cup Pool B match against a sloppy Pakistan here Saturday. 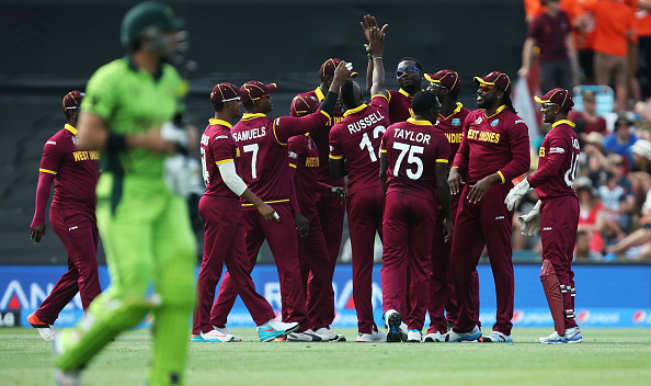 The common thing in Pakistan’s batting and fielding against West Indies was – Dismal. The word perfectly describes Pakistan’s performance in the tenth match of 2015 Cricket World Cup at Christchurch’s Hagley Oval. The 1992 World Cup champions who have been talking about repeating their maiden World Cup glory here in Down Under found themselves down and out against Jerome Taylor led West Indian pace attack. They were struggling at forty runs for the loss of five wickets. Their top order consisting Misbah-ul-Haq, Nasir Jamshed, Younis Khan, Haris Sohail and Ahmed Shehzad back in the hut. One can catch the full video highlights of all the five dismissals on the official website of Star Sports. Also Read - Played 2015 ODI World Cup With a Broken Knee: Mohammed Shami

Nasir Jamshed was the first to start the fielding howlers during West Indies innings and in Pakistan’s batting he was the first to open the flood-gates. He was removed by Taylor in the second delivery of the innings. Trying to play the pull-shot but only being able to top-edge, Jamshed was caught by Andre Russell at the mid-wicket. You can catch LIVE UPDATES of the PAK vs WI match here.

Younis Khan got the perfect shot at Darren Bravo but another opportunity to get his form back was wasted. He too got embroiled in fiery Taylor spell. Perfect delivery, no footwork and nice outside edge to wicket-keeper Denesh Ramdin gives Younis Khan a perfect Golden Duck! Also Catch: How to watch the Live Telecast and Streaming of Pakistan & Bangladesh Cricket World Cup 2015 matches

He joined his senior player in the list of ducks as Sohail became Taylor’s third victim. It was not quite a wicket taking delivery but Carter in the side as substitute ensures his contribution as he takes the catch in second attempt. Catch the video highlight of Haris Sohail’s dismissal on the Official Website of Star Sports.

Captain Jason Holder joins the party to get rid of Ahmed Shehzad who had scored the only run on scoreboard for Pakistan at that point of time. Apart from good piece of bowling, Holder also proved to be a thinking captain as he brings in the gully and forces Shehzad into playing the shot at gully only to be caught by Lendl Simmons. Pakistan have lost 4 wickets for 1 run by now.

It was heart as well as hope crushing moment for Pakistan as they saw their captain hit the turf in disgust. After putting a temporary brake on the continuous fall of wickets, Misbah went down to a poor delivery from Andre Russell. He walked back to the pavilion like a lost warrior.

Earlier, an all-round batting performance from the West Indies helped them to 310 for six in their World Cup Pool B match against a sloppy Pakistan here Saturday. Pakistan were left to rue several dropped catches after winning the toss and deciding to bowl first as the West Indies recovered from the loss of early wickets to post a strong total at Hagley Oval.