Pakistan vs Ireland, 2015 Cricket World Cup Group B Match 42: Misbah-ul-Haq, Paul Stirling among 5 Key Players to watch out for in PAK vs IRE

Both Mishbah-ul-Haq’s Pakistan and William Porterfield’s Ireland have six points from their five matches as they eye quarterfinals berth. 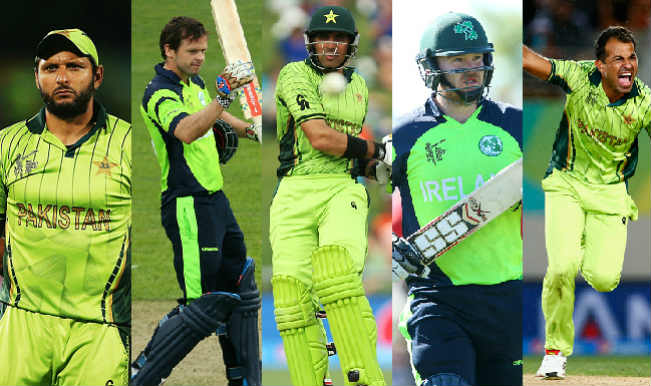 The final match of 2015 Cricket World Cup group stage could not have asked for a bigger contest. The Match 42 features Group B clash between Pakistan and Ireland at the Adelaide Oval. Both Mishbah-ul-Haq’s Pakistan and William Porterfield’s Ireland have six points from their five matches as they eye quarterfinals berth. Take a look at the five players who can lead their sides to victory on March 15. Also Read- Pakistan vs Ireland Match Preview. Also Read - I Have Total Control in Team And Selection Matters: Babar Azam

With 277 runs already scored in the tournament at an average of 55.40, Mishbah-ul-Haq has played the role of perfect sheet anchor to the brittle Pakistani batting line-up. Apart from providing much needed stability in the side, Misbah’s sharp captaincy is also drawing appreciations. Also Read: 3 key battles to watch out for in PAK vs IRE

With 11 wickets in 5 matches, Riaz has donned the role of Pakistan’s front line wicket-taker in company of spearhead Mohammad Irfan. Wahab Riaz’ s contribution with the willow also shows his intent to warming up to his new found role of an all-rounder.

He completed 8000 runs and stands five short of 400 wickets in One Day Internationals (ODIs) but for Shahid Afridi, the match against Ireland will be much more than individual landmarks. The clash is touted to be won on any cost so that the side can make it to knockout stage. It is a perfect setting for the Pakistani veteran to give his best.

Playing against India, Irish opener Paul Stirling did not think twice before hammering defending champs lead bowlers around the park. The no fearing attitude makes Stirling a dangerous opponent both with the bat and ball.

After leading Ireland to a victory against Zimbabwe with a match winning century, Ed Joyce failed miserably against table toppers India. The 36-year-old will look forward to redeem the lost chance against Pakistan and see his side cross the line and create history. Also Read- ICC Cricket World Cup 2015 Schedule in IST: Time Table, Fixture & Venue Details of all WC 2015 Matches.