Another defeat looks on card but as they say in cricket - The match is not over till the last ball is bowled. 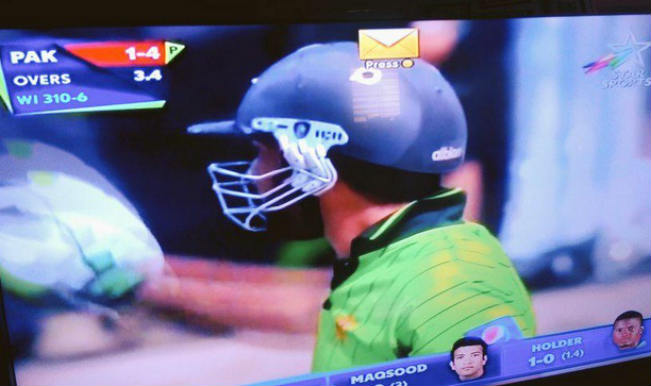 Please do not get me wrong for putting this question, but what funny cigarettes did Misbah-ul-Haq and his side smoked last night before their clash against West Indies in 2015 Cricket World Cup? This question is flying on micro-blogging site, Twitter after four Pakistan batsmen went to shade with their total number of runs on scoreboard reading  – ONE. In reply to West Indies 310, the Green Shirts managed to put 1/4 after 3.4 overs on Pakistan’s scoreboard with Nasir Jamshed, Younis Khan, Haris Sohail and Ahmed Shehzad back in pavilion. You can catch LIVE UPDATES of the PAK vs WI match here. Also Read - PK-W vs WI-W Dream11 Team Prediction, Fantasy Tips Pakistan Women vs West Indies Women 3rd ODI: Captain, Vice-Captain, Probable Playing 11s - Pakistan vs West Indies, Team News For Today's ODI at National Stadium 10:30 AM IST November 14 Sunday

West Indies wrecker-in-chief Jerome Taylor ripped through the heart of Pakistan batting leaving them distressed and probably with no option of making a comeback. ICC Cricket World Cup 2015 has been quite tough for Pakistan so far, first they became butt of jokes after their heavy defeat to India and now West Indies is leaving no stones unturned in humiliating the side. After poking fun at Pakistan cricket team’s sloppy fielding, Twitterati came alive in ridiculing their dismal batting performance. Also Read - It Hurt Too Much: AB de Villiers Recalls Losing to NZ in 2015 WC

“@LonelyStranger_: 1 run 4 wickets down…after a long tim seeing something like this tat too is #PAKvWI Pak batting ;)”..aj LCD tod do

High hopes from national cricket team does not go down well with loyal Pakistan fans.

When did we last have this kind of humiliation #PAKvWI — Fawad Masud (@FawadMasud) February 21, 2015

Yes, with the kind of havoc, Jerome Taylor caused with his opening spell, no wickets in seven balls calls for bad bowling. Also Catch: How to watch the Live Telecast and Streaming of Pakistan & Bangladesh Cricket World Cup 2015 matches.

WI heaping insult. This isn’t cricket. It’s massacre. Is this the record for the worst start by pak? #PAKvWI

It is going to be long road ahead for Pakistan in this match as well as the 49-match long tournament ICC World Cup 2015. Another defeat looks on card but as they say in cricket – The match is not over till the last ball is bowled. We are sure all the Pakistani fans would cross their fingers and pray for some miracle.