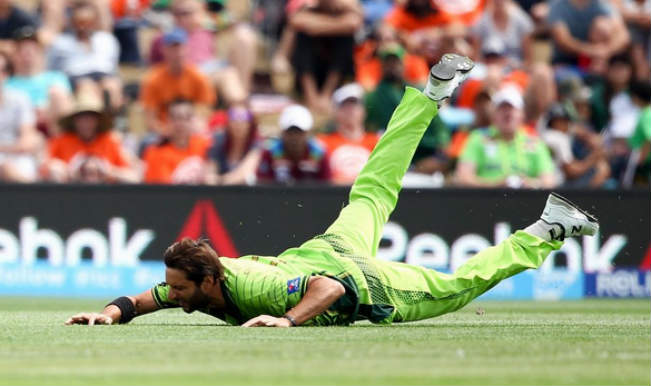 In the PAK vs WI clash, the string of dropped catches was started by Nasir Jamshed when he dropped a ridiculously easy catch of Dwayne Smith. But the main culprit in dropping dollies was team veteran Shahid Afridi, who just could not hold anything in his hands. He let go off Marlon Samuels and Darren Bravo. One person who just cannot escape this list is their wicket-keeper Umar Akmal who should be renamed Mr. Butter Fingers also dropped Samuels. Take a look at what netizens on Twitter had to say about the hilariously grim situation.  You can catch LIVE UPDATES of the PAK vs WI match here. Also Read - Ramiz Raja, Shoaib Akhtar React After ICC Announces Pakistan as Hosts of Champions Trophy 2025

Pakistani fielding so far has looked like they’ve had a few too many plates of biryani 🙂#cwc15 #PakvWI #Cricket pic.twitter.com/6V6i6tzACP — Saj Sadiq (@Saj_PakPassion) February 21, 2015

Could not have agreed to this one more. One can ask the poor man Grant Luden, who seems to have not made the boys in green shirts, a thing or two about catching or fielding. Also Catch: How to watch the Live Telecast and Streaming of Pakistan & Bangladesh Cricket World Cup 2015 matches.

You have to watch it to believe the sitter dropped by Shahid Afridi!

What Pak fielders doing with their fielding is quiet similar what Aunties do with their makeup in shadi! Both need to be fix! #PAKvWI

Young Yasir Shah was playing as substitute in the side as commentators were heard discussing why he was not in the side. Reason – Because he has pair of ‘safe hands’ and that makes him a complete outsider.

#MQM contacted YounisKhan to hire him as target killer #PAKvWI

This was brutal throw by Younis Khan. He aimed at stumps (everyone would like to believe so) but instead knocked the poor Darren Bravo down. What a perfect aim it was, right at the grills of helmet. Woah!

One is just left wondering, how does Pakistan end up fielding like this – be it their ground fielding or issues with their catching, everything is running into trouble as well as funny. Misbah-ul-Haq needs to feed in this old cricketing catchphrase – Catches win matches! Also Read: ICC Cricket World Cup 2015 Schedule: Complete Fixtures & Time Table of all Cricket World Cup 2015 Matches.