The aggressive pacer reduced the Pakistani batting line-up to the score of one at the loss of four wickets. 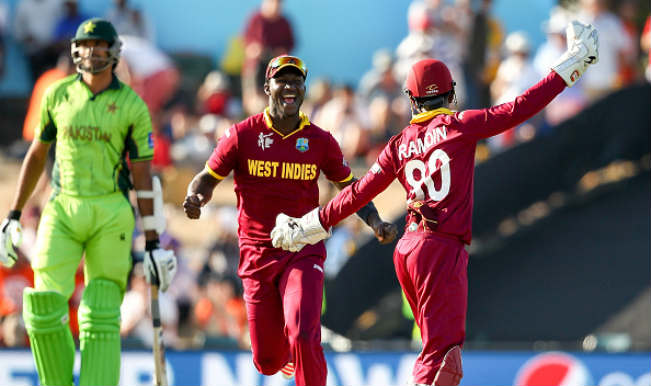 After their morale-shattering record sixth defeat at the hands of nemesis India in the opening match, Pakistan made some bold moves to get back to winning ways in ICC Cricket World Cup 2015. In order to strengthen their batting line-up, they dropped leg-spinner Yasir Shah and bringing in Nasir Jamshed as opener and reschedule Younis Khan batting position to third in line-up but in the end it contributed to nothing as they succumbed to an embarrassing defeat by 150 runs to West Indies in Hagley Oval, Christchurch. West Indies with this fantastic win move up to second place in the points table of Group B while Pakistan is placed at the bottom in team standings. One can catch the full video highlights of PAK vs WI on the official website of Star Sports here. Also Read - Played 2015 ODI World Cup With a Broken Knee: Mohammed Shami

However, the West Indies were able to recover as Darren Bravo (49) and Marlon Samuels (38) tried to attack before Bravo retired hurt with a hamstring injury. Also Read: Pakistan vs West Indies, ICC Cricket World Cup 2015: Top 5 highlights of the PAK vs WI match.

Denesh Ramdin’s 51 off 43 helped to accelerate the Windies past 300, with Lendl Simmons hitting 50 off 91 balls. The West Indies managed to reach 310-6 after Andre Russell smashed a quick-fire 43 off just 13 deliveries in the dying overs. An all-round batting performance from the West Indies helped them to 310 for six in their World Cup Pool B match against a sloppy Pakistan here Saturday. Also Read: Watch Full Video highlights of 5 wickets in PAK vs WI Cricket World Cup 2015 match.

When Pakistan stepped on to the crease while chasing 311 runs, they would not have sensed the coming horror from Jerome Taylor. The aggressive pacer reduced the Pakistani batting line-up to the score of one at the loss of four wickets. Misbah’s boys could never get over the early onslaught and barely managed to keep the defeat at bay till last wicket in form of Sohail Khan was taken by Sulieman Benn in 39th over. Benn had replaced Kemar Roach in their bowling attack from the side that lost to Ireland.

In the end, Pakistan were left to rue several dropped catches after winning the toss and deciding to bowl first as the West Indies recovered from the loss of early wickets to post a strong total at Hagley Oval. Also Read: ICC Cricket World Cup 2015 Schedule: Complete Fixtures & Time Table of all Cricket World Cup 2015 Matches.