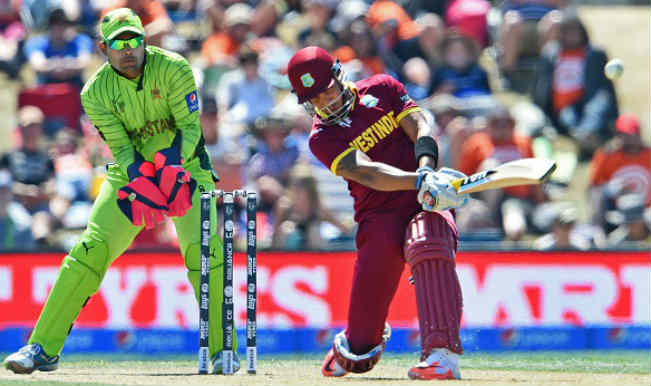 West Indies batsmen Andre Russell power hitting lower down the order gave their side a healthy total of 310 in 2015 Cricket World Cup match number 10 is taking place between former world champions, Pakistan and West Indies. The Group B fixture taking place at Hagley Oval in Christchurch is seen as an attempt to get the campaign back on track after both sides lost their opening matches of tournament. Take a look at the major highlights of West Indies innings here. You can catch LIVE UPDATES of the PAK vs WI match here. Also Read - It Hurt Too Much: AB de Villiers Recalls Losing to NZ in 2015 WC

It was one of the major highlights of first innings as West Indies batted. The terrible run of Pakistan fielders especially senior Shahid Afridi who dropped simple, regulation catches. And not to miss, their wicket-keeper Umar-Butter-Fingers-Akmal let go of another catch. Most of West Indies top order got a lifeline once in their stay on crease, be it Dwayne Smith, Marlon Samuels, Darren Bravo. Pakistan’s fielding was substandard, even worse compared to their usual fielding standards.

He walked in to bat when West Indies had lost their two most experienced players and also the opening partners under ten overs. Bravo in company of Marlon Samuels showed good intent as he hit three boundaries in his innings. He also braved through the brutal throw on his head by Younis Khan, but later retired at the individual score of 49 when he pulled a hamstring.  Also Catch: How to watch the Live Telecast and Streaming of Pakistan & Bangladesh Cricket World Cup 2015 matches.