The last time the two sides met was in the 1999 World Cup at Bristol, which remains the only occasion when Pakistan won against the West Indies in World Cup history. 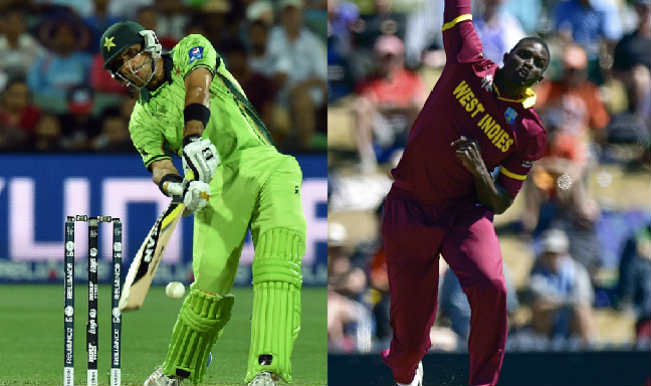 Two cricket teams considered highly unpredictable and dangerous – West Indies and Pakistan – clash in a potential cliffhanger in the 10th match of the World Cup at the Hagley Oval here Saturday. West Indies and Pakistan are both seeking their first win after suffering moral bashing opening round defeats against Ireland and India respectively, reports CMC. Also Catch: How to watch the Live Telecast and Streaming of Pakistan & Bangladesh Cricket World Cup 2015 matches. Also Read - It Hurt Too Much: AB de Villiers Recalls Losing to NZ in 2015 WC

Jason Holders’ men had a full training session Thursday afternoon and all players participated in the session. “We are ready to turn the corner and go ahead as far as we can in this world cup,” announced left-arm spinner Sulieman Benn. Also Catch: Pakistan vs West Indies, ICC Cricket World Cup 2015 Group B, Match 10: Live Scoreboard and ball-by-ball updates.

Legendary off-spinner Saqlain Mushtaq said West Indies cricket at the moment was reeling due to internal strifes and Pakistan should take full advantage of this situation when the two sides meet in Christchurch tomorrow. “It would be foolish to take any West Indian side lightly but at the moment our batsmen need to get the momentum going and we can win this crucial encounter,” he said. Saqlain pointed out that without Sunil Narine the West Indies bowling attack lacked variation.

West Indies aim to rebound after failing to defend 304 against Ireland although the structure of the World Cup draw means that the Caribbean side is far from out of quarterfinal contention. But a win over Pakistan Saturday would put their campaign back on track in Group B from which four teams will make the last eight.

Pakistan’s former captain Mushtaq Muhammad pointed out that the performances of weaker teams and Ireland’s shock win over West Indies should come as a warning signal for Pakistan.

The last time the two sides met was in the 1999 World Cup at Bristol, which remains the only occasion when Pakistan won against the West Indies in World Cup history.