Zimbabwe skipper Elton Chigumbura showed great character when he walked on the field to help his side despite being hurt with a suspected torn quadricep. 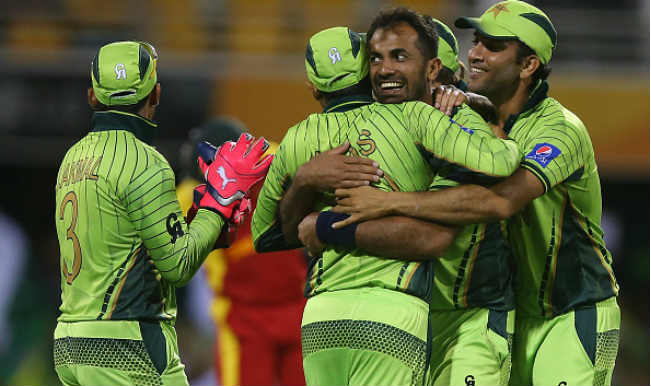 Finally the Match 23 saw Misbah-ul-Haq’s Pakistan cricket team managing to register first win in ICC Cricket World Cup when they beat Zimbabwe by 20 runs playing at the Gabba in Brisbane. Not that the Group B fixture was anything easy for the 1992 World Champions as they were made to fight tooth and nail by their opponents. But riding high on all-round performance by Wahab Riaz, spearhead Mohammad Irfan and skipper Misbah-ul-Haq’s fine contribution, Pakistan finally managed to break the losing streak in ICC Cricket World Cup 2015. With this win, Pakistan take first two points to climb to sixth place in the Group B points table. One can catch the full video highlights of Match 23 of 2015 Cricket World Cup, PAK vs ZIM on the official website of Star Sports here. Also Read - PAK vs ZIM Dream11 Team Prediction Zimbabwe Tour of Pakistan 2020: Captain, Vice-captain, Fantasy Playing Tips, Probable XIs For Today's Pakistan vs Zimbabwe 1st ODI at Rawalpindi Cricket Stadium 12.30 PM IST October 30 Friday

The ideal turnaround that Misbah-ul-Haq was expecting against Zimbabwe especially after Pakistan were coming off the two defeats against India and West Indies was shattered with the first five overs play in the match. Pakistan Openers Nasir Jamshed (1) and Ahmed Shehzad (0) were bowled out, with the 1992 edition champions tottering at 4/2. Pakistan lost the fifth wicket at 127 in the 34th over. But it was skipper Misbah-ul-Haq who played the anchor’s innings, making 73 from 121 balls.Taking the Pakistan to a decent total of 235 was quick knock of 54 not out from 46 balls by Wahab Riaz towards the end of the innings helped Pakistan cross the 200-mark. Riaz’s first One-Day International (ODI) half-century is the highest score as a No.8 batsman in this World Cup.  Catch the Updates Points Table of the 2015 Cricket World Cup here. Also Read - Pakistan vs Zimbabwe 2020 Live Streaming Details: Squads, Schedule, Live Streaming Details, And Everything You Need To Know

Coming into chase Pakistan’s set target of 236, Zimbabwe were struck by towering Mohammad Irfan, when he removed openers Chamu Chibhabha and Sikandar Raza by seventh over. But Zimbabwe’s innings looked well in control with Brendan Taylor smashing half-century in the tournament. Another in-form batsman Sean Williams also made 39 but the fall of wickets at the  regular intervals hurt the African nation in the end. Zimbabwe skipper Elton Chigumbura showed great character when he walked on the field to help his side despite being hurt with a suspected torn quadricep. He sustained injury when Chigumbura attempted a dive but tripped and landed quite heavily on his left knee during the Pakistan innings.