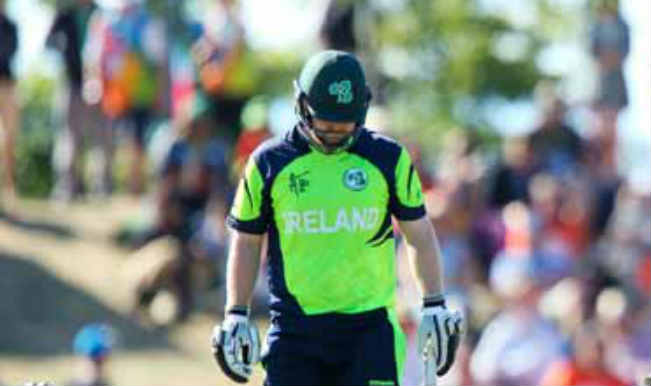 Paul Stirling was the first wicket to fell for Ireland after a decent opening stand. Ireland after winning the toss opted to bat first and openers William Porterfield and Stirling shared 89 for the first wicket. Stirling was looking to over long-off, but could not get the distance and was caught by Ajinkya Rahane. The right-handed batsman looked in good touch before playing a poor shot. He fell on an individual score of 41 off 42 balls. You can watch the video dismissal of Paul Stirling’s wicket here. Catch- Live Score Updates of India vs Ireland here. Also Read - Sunil Gavaskar Names 2 Players Who Can do All-Rounder's Job & Replace Hardik Pandya in Team India

Despite having already qualified for quarterfinals, India fielded the unchanged side that featured against West Indies at Perth. Team India have been undefeated so far, winning four out of four matches. India have registered straight eight victories at the mega event, starting from their win against the West Indies in Chennai during the 2011 edition. MS Dhoni’s boys are likely to top Pool A and face Bangladesh in quarterfinals. Watch India vs Ireland live streaming & score updates on Mobile. Also Read - ENG vs IND 2021: Virat Kohli And Co. Has Centre Wicket Training Session | See Pics