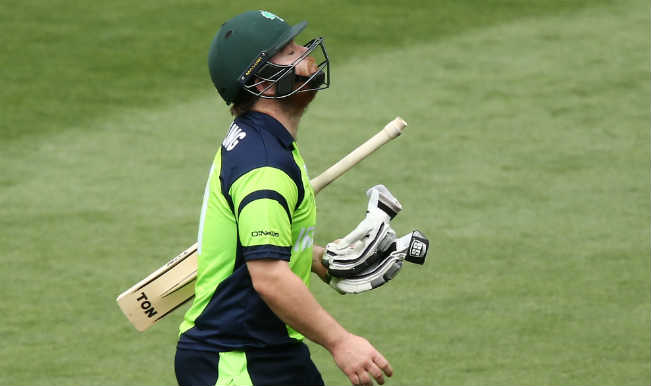 Opener Paul Stirling failed to contribute with the bat and was first wicket to fell for Ireland. Ireland after winning the toss opted to bat first on a pitch which is pretty good for batting. The right-handed batsman was trapped in front of the wickets by Ehsan Adil while looking to play across. All Stirling could manage was three runs off eight deliveries. You can watch the video dismissal of Paul Stirling’s wicket here. Catch- Live Score Update of Pakistan vs Ireland match here.  Also Read - Amit Panghal vs Y. Martínez; Pooja Rani vs Li Qian, Tokyo Olympics 2020: When And Where to Watch India's Boxing Matches At The Games

Both the teams have so far managed to secure six points each, but Pakistan with a slight better run-rate in occupying third spot on points table. Winner from this contest will get proceed to next round while the loser has a possibility of facing an exit. It will be between West Indies and the loser of this that the final spot from Group B will be decided. The team with run-rate will go through. Watch- Pakistan vs Ireland live streaming & score updates on Mobile. Also Read - Highlights Hockey Score And Updates Tokyo Olympics: India Advance to Quarters With 3 Straight Wins, Beat Japan 5-3

Both Pakistan and Ireland will be eager to win on their own and avoid any maths for the qualification to next round. Both the teams have had contrasting World Cup campaign so far. While Ireland stunned West Indies in their opening game and then lost the momentum, Pakistan on the other hand had disastrous start to their World Cup losing first two matches but slowly picked up to beat Zimbabwe, United Arab Emirates (UAE) and South Africa on their way.

Paul Stirling is an aggressive batsman and his dismissal may affect Ireland’s scoring rate. However captain William Porterfield looks in good touch and is playing his shots. Any opportunity provided to him he has cashed on it so far.