John Mooney's accurate bowling has given Ireland a terrific start at the Manuka Oval. 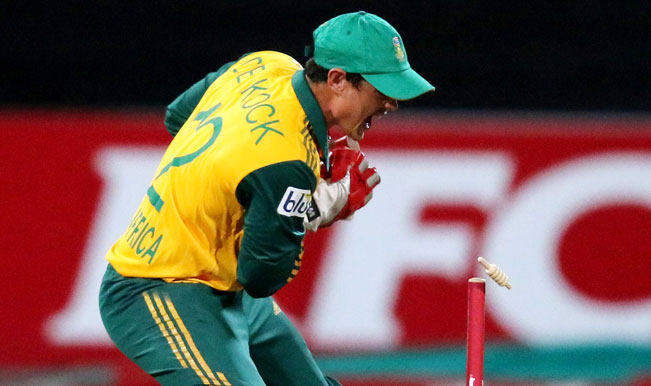 Much was spoken about the Ireland side making their presence felt in this ICC World Cup 2015  and here they are again and as they make the first inroads in the South African lineup. John Mooney’s terrific line was stifling the batsmen and the ball beat the bat’s edge many times in his first over, which was a maiden. Mooney was steaming in for his second over and the defensive Quinton de Kock made a nervous prod at the ball and there was  a faint edge before the ball went to the ‘keeper, Gary Wilson. The decision was referred after umpire Ruchira Palliuguruge tuned down Ireland’s appeal. Ite was a close call that went Ireland’s way. Catch the wicket of Quinton de Kock here Also Read - Woman Found Dead With Two Kids in Ireland Last Week Hailed From Karnataka

Ireland have proved they are no pushovers and a win here will put them on the cusp of qualification. South Africa have made no changes to the team from last time around as JP Duminy still recovers from injury.  Catch the Live Streaming of the match here Also Read - 7 Countries Indians Are Not Allowed to Visit Yet Including Malaysia And Germany

Ireland are using two spinners in the lineup — Andy McBrine and George Dockrell — and the rest of the team remains the same but will be relying on their plucky batting unit to come through. Ireland have proven to be great chasers but their immediate challenge is to restrict the likes of Hashim Amla, De Villiers and Faf du Plessis. Catch the Live Updates of the match here