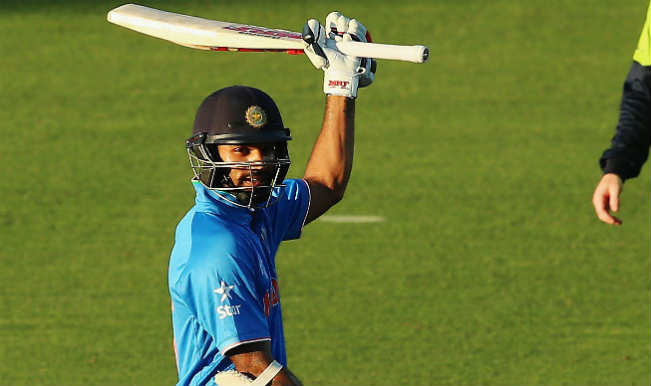 Shikhar Dhawan made full use of the double lifeline as he slammed his career’s eighth One-day International (ODI) century off just 84 balls. Dhawan was dropped twice- on 5 and 10 and looked shaky early on against Ireland while chasing 260. The left-hander then started picking his spots and marched towards the magical three figure mark. Once he got his eye in, Dhawan then found the fence regularly and at will. You can watch the video highlights of Shikhar Dhawan’s hundred here. Also Read - Rahul Dravid Officially Applies For Team India Head Coach's Post; VVS Laxman Likely to Take Over at NCA

Dhawan along with Rohit Sharma led the Indian charge with a mammoth 174-run opening stand and kept Ireland at bay. The two then got separated in 24th over with Rohit dismissed on an individual score of 64. This is Dhawan’s second hundred in last four innings. Check Out- Updated Points Table of 2015 Cricket World Cup. Also Read - IND vs PAK: Virat Kohli Reacts After Loss vs Pakistan in T20 World Cup 2021, Says Not Going to Press Panic Button

The swashbuckling left-hander was in poor form in Tr-Series preceding World Cup, but announced his arrival to form in style with 73 against Pakistan in India’s opening game at Adelaide Oval. Dhawan then continued with his form and smashed career best 137 against South Africa at Melbourne Cricket Ground. However, he was dismissed cheaply United Arab Emirates and West Indies in his last two outings. With not much contribution in last two games, Dhawan came into this match with a bit of pressure on him as it was the extra bounce, his weakness, that had brought his downfall in both the innings. Interestingly, Dhawan’s five out of eight centuries have now come outside Asia. Also Read- Read: ICC Cricket World Cup 2015 Schedule in IST: Time Table, Fixture & Venue Details of all WC 2015 Matches.