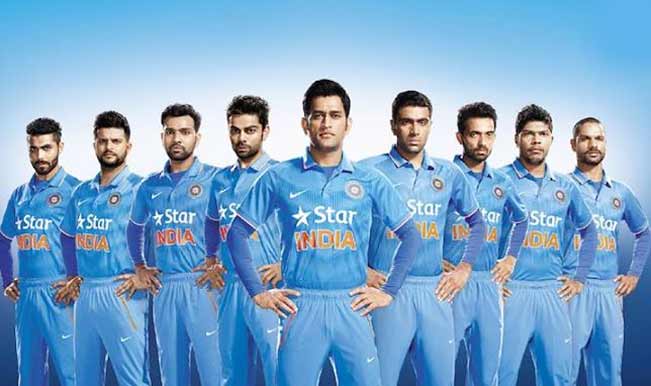 Team India’s official team jersey was unveiled by BCCI in association with their official kit sponsor Nike. The Indian cricketers will be seen in their new striking ODI kit when the take the field against Australia here on Sunday. With less than a month to go for the biggest event of the cricketing history, ICC Cricket World Cup 2015 to commence, it was memorable event for both the players as well as their fans. BCCI showcased the new official jersey of Team India at the Melbourne Cricket Ground (MCG), Meblourne that will also be the venue for the prized final. ICC World Cup 2015 will be co-hosted by Australia and New Zealand, begins from February 15 and will end of March 29. Also Read - IPL Auction Highlights: RPSG Group Takes Lucknow with 7000 Crore Bid, CVC Capital Bags Ahmedabad

Indian cricket team after not having a great run in the four-match Test series against Australia will be looking forward to getting groove in the shorter format of the game. India will be playing with Australia and England for the Carlton Mid Tri-Series title first and move on with their mission of retaining the World Cup title got a new jersey. BCCI in association with Nike as the main sponsor. Also Read - IPL New Team Auction: Twitterverse React to Ahmedabad and Lucknow Inclusion in the Cash-Rich League

BCCI in association with @NikeCricket unveil the all new Official Team #India Jersey at the MCG pic.twitter.com/MtuPZr1z3o

At the MCG, Indian skipper MS Dhoni led members of the Indian team to unveil the team’s new ODI kit along with Team India kit sponsor, Nike. BCCI revealed about the inputs from both Captain Dhoni and Vice-Captain Virat Kohli in the new design of the jersey and kit. The new team jersey displays a new shade of blue and the modern technicalities to suit players, something Nike is well-known for. Also Read: ICC Cricket World Cup 2015 Schedule in IST: Time Table, Fixture & Venue Details of all WC 2015 Matches

Dhoni was enthusiatic about the design reflecting a tinge of nationalism approach as he described ‘the strands that are drawn in the front are out of our national flag (the 24 lines in the Ashok Chakra) and it gives a bit of a feel to it.’ As for Kohli, jersey’s fit was the most significant aspect. Also Read: Know all the players of Team India for ICC Cricket World Cup 2015