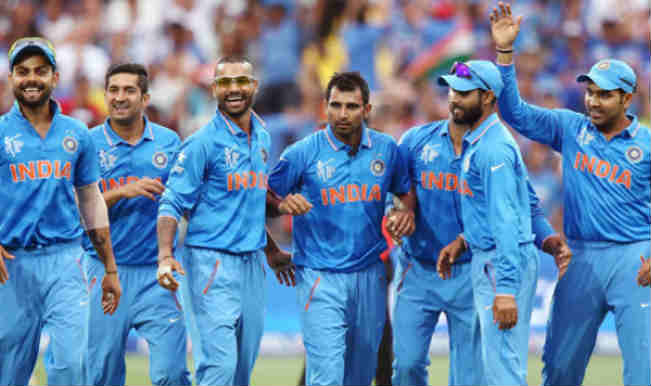 Watch the free live cricket streaming as India (IND) is set to take on West Indies (WI) at WACA Ground, Perth. The Group B Match 28 of ICC Cricket World Cup 2015 is being telecast on Star Sports 1 and Star Sports 1 HD. Viewers can also watch the match on Star Sports 3 for Hindi commentary. You can also watch the free live streaming of the IND v WI match on your mobile phones and tablets by accessing the mobile site of star sports mobile site here. The live streaming is supported across all popular mobile platforms like Android, iOS, BlackBerry and Windows. Also Check- How to watch the Live Telecast & Streaming of India vs West Indies Cricket World Cup 2015 match in India, Pakistan, Bangladesh, West Indies & USA? Also Read - Wasim Jaffer Highlights Technical Flaw That Shubman Gill Needs to Work On to Succeed At International Level

Defending Champions India after three back to back impressive outings will now seek their fourth win and stay unbeaten. Team India are on a high after crushing their opponents pretty easily. MS Dhoni and co. have done well to bounce back after their dismal show in Tri-Series preceding World Cup and now will look to continue the momentum. Facing West Indies at Perth could be a tricky situation for India as the Caribbean side have firepower and ammunition to extract extra bounce from the pitch. Also Catch: India vs West Indies, Live Score Updates and Ball by Ball Commentary here Also Read - Rahul Dravid Revives Good Old Tradition That Ended When MS Dhoni Took Over Captaincy Duties For India

For West Indies it has been a mixed tournament so far. They faced a shambolic defeat against Ireland and then mauled Pakistan and Zimbabwe. In their last game they could not match the expertise of South Africa and eventually lost the contest by a huge margin of 257 runs. West Indies will now be looking to stun defending champions and move one step closer to next round. Also Read: ICC Cricket World Cup 2015 Schedule: Complete Fixtures & Time Table of all Cricket World Cup 2015 Matches.