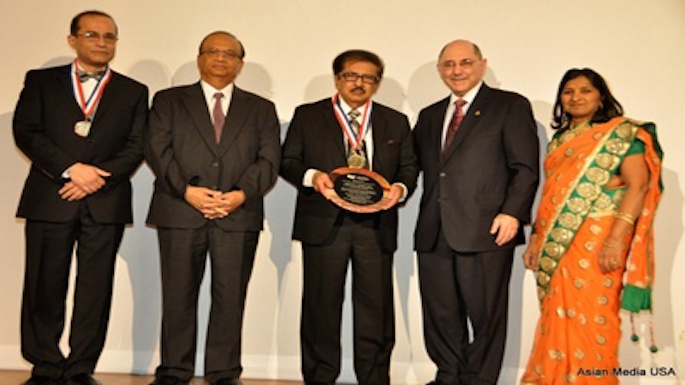 The meeting reflected on the highlights of the past year and focussed on its future in the coming year. Also Read - Mohun Bagan Misplaced Gostha Pal's Padma Shri Award, Claims Son

Its motto is unity of purpose, collegiality in action, commitment to excellence and compassion towards fellow beings.

The keynote Address was given by Dr. Elliott Antman, president of the American Heart Association, who had specially flown in from Boston. Dr. Hemlata Bakane IAMA president, presented an appreciation plaque to Dr. Antman for delivering the keynote address and joining the IAMA event.

The crowning glory was the historic Congressional salute to 20 past IAMA presidents from 1981 to 2013 all of whom were present and were honored by US Congressman Danny K. Davis by presenting each president with a medal.

IAMA president Dr Bakane also presented each past president with prized official congressional cufflinks as a commemorative honor for their exemplary leadership.

The first prize went to Bhagya Puppala, the second prize to Christopher Nyugen and the third to Shikha Jain.

Dr. Hemlata Bakane expressed her appreciation to those who helped her throughout the year, especially Chaya Patel, wife of incoming president Dr Kamal Patel, for creating beautiful centerpieces, Sayali Vilekar for her dedication and expertise, Neelesh Vilekar for excellent work as technology consultant.

Vote of thanks was performed by Dr. Tapas Dasgupta who thanked everybody, including exhibitors/ booth sponsors, the souvenir advertisers, Air India and all other patrons who bought tables and raffle tickets.