It looks like a dangling, shiny plastic charm, but it’s actually an innovative high-tech device that may revolutionize health care in India. This is Khushi Baby, a small medical device designed to streamline the process of vaccinating children in the developing world. 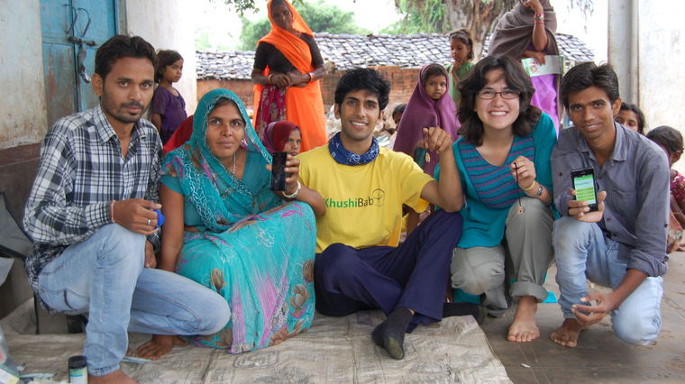 Yale University senior Ruchit Nagar (c) is the Indian American cofounder of Khushi Baby, a company that has created a wearable device that tracks infant immunizations in the developing world.

By Lisa Tsering Also Read - Hundreds of UP Madrassas Refuse Vaccination to Children Over WhatsApp Rumours of Impotency: Report

SAN LEANDRO, Calif. — It looks like a dangling, shiny plastic charm, but it’s actually an innovative high-tech device that may revolutionize health care in India. This is Khushi Baby, a small medical device designed to streamline the process of vaccinating children in the developing world.

“Appreciating the cultural nuances is extremely important when attempting to propose an intervention of this kind but also for doing field work in general,” explained the company’s Indian American cofounder, Ruchit Nagar, in an e-mail interview with India-West.

“However, we don’t want to stop with India. We are in conversation with several other organizations — VillageReach, Gates, and others — to see how we can expand in other countries and break new ground in the mHealth [mobile health] space.” 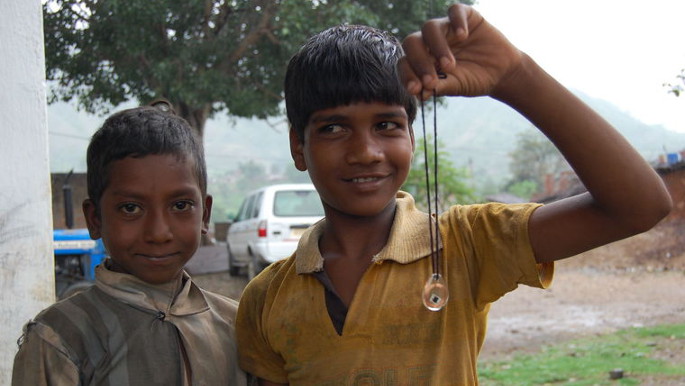 The sturdy plastic Khushi Baby pendant holds a small near-field communication chip that stores an infant’s vaccination and health records. A health care worker scans the chip to see what vaccinations the baby needs, using a simple mobile phone app that requires no Internet connection. Once back in cellular range, the worker can then upload the data to the cloud — and other medical professionals can see the information in real time.

The project won Yale’s $25,000 Throne Prize for Social Innovation in Health, and Nagar and his team traveled to Rajasthan in July 2014, where they built and developed the product while working with local villagers and community healthcare workers.

“We settled on India, and specifically Rajasthan, in part because there was a strong field partner to be made in the form of Seva Mandir — with a history of over 10 years and 100+ villages in which they run their immunization camps,” he said.

India has one of the world’s lowest immunization rates, and as in much of the developing world,vaccination rates are spotty in part because of the antiquated practice of keeping records in huge, unwieldy log books or in paperwork that is hard for a family to keep track of. This also makes it difficult for community health workers to know which vaccines to bring along to immunization camps. In addition, said a spokesperson for Khushi Baby, many mothers don’t understand the importance of vaccines (and needed booster shots), and some even choose not to take their children to immunization clinics. 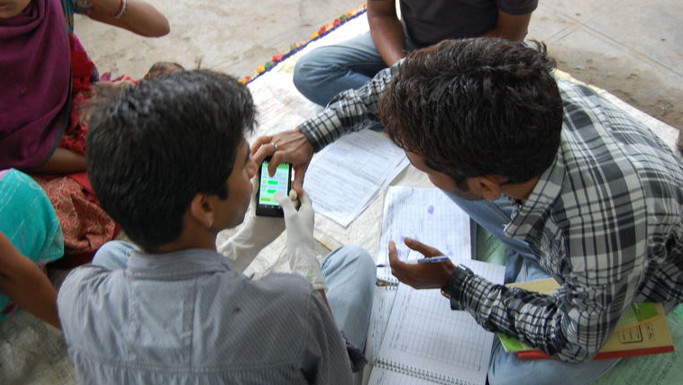 Data from the Khushi Baby pendant is uploaded to a smart phone with no Internet connection necessary.

In India, vaccination is not required for school admission, said Nagar. But World Health Organization guidelines recommend that children under age 2 receive vaccinations at 4-8 week intervals, depending on the vaccine. “Seva Mandir, our partner NGO, hosts monthly camps at each village to make sure children are receiving vaccines at the approximate scheduled due date.”

The Indian government issues the vaccine drugs, and other organizations such as Seva help administer them. “We’ve met with the Rajasthan Ministry of Health to learn more about their e-health system. Right now we are in the pilot phase of our study, but if the results are promising, we hope to scale up via a government scheme so that these necklaces can be distributed en masse,” said Nagar.

At first, the team — Nagar and 2014 Yale graduates Ife Omiwole, Teja Padma, and Leen van Besien — designed a rubber bracelet containing a memory chip. But after determining that necklaces were more widely used, they switched to the pendant model. “We chose a wearable form factor because it is something that can stay directly with the child, and it is cheap and durable enough to last through the critical ‘1,000-day window’ from birth in which 15-20 doses must be administered,” said Nagar.

“The idea of the necklace came from observing children who were already wearing similar spiritual necklaces to promote good health and fortune, and from talking with the mothers in these villages.” 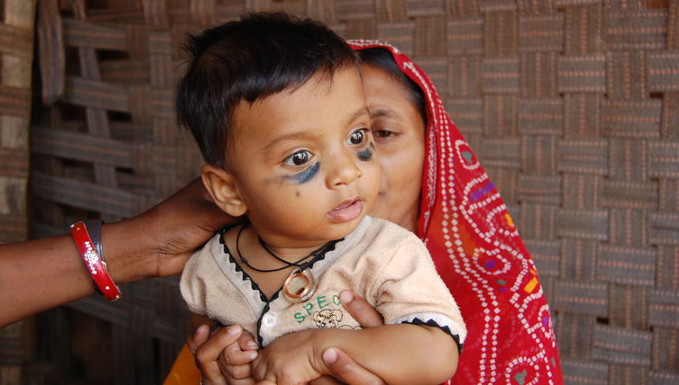 Since Indian babies are often given necklaces to wear for good luck, Khushi Baby’s founders decided to make their wearable medical device a simple plastic pendant.

Babies are the first users of the unique necklaces, but Khushi Baby sees far-ranging applications for the invention. “Right now, we are storing the vaccine timetable for children on the chip, but similarly we could store a TB medication timetable for adults. Monitoring TB DOTS [directly observed therapy — short term] and scheduling is essential to ensuring that patients do not develop drug resistance forms of the bacteria. Other medication timetables are also possible (e.g. HIV/AIDS therapy),” he said.

“One could also imagine storing basic ID, blood type, allergies, and genetic conditions — emergency responders could quickly scan the chip to bring up this critical relevant information in the field immediately.”

Seeing the success of Khushi Baby (the name means “happy baby”) in India has been especially meaningful for Nagar. “As an Indian American, I am humbled to be reconnected with my roots, and certainly working in India means a lot to me,” he told India-West.

“It’s a very humbling experience and I’m really glad I have a strong impetus to return to my mother country and give back … Here we have so much luxury, but it should not be so easy to take comfort in them when our brothers and sisters across the world lack basic opportunities and rights — health being the most important of them.”