A strong middle class, especially in India’s villages, is essential to growing India’s economy by eight to 10 percent, concluded a panel of five community leaders July 24 at the annual Indian Institute of Technology Global Leadership Conference.

The 31-year-old Holmes, who dropped out of Stanford University at age 19 to found Theranos, received a standing ovation before and after she delivered her keynote address at the conference on July 25. 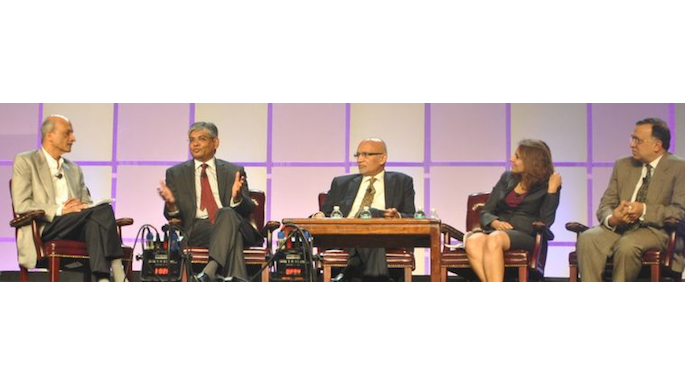 Five prominent Indian Americans engaged in a spirited debate about India’s future in a panel discussion at the IIT Global Leadership Conference. From left to right: moderator M.R. Rangaswami, founder of Indiaspora; Indian Ambassador to the U.S. Arun Singh; Arun Kumar, Assistant Secretary of Commerce for Global Markets and Director General of the U.S. and Foreign Commercial Service; Neera Tanden, president of the Center for American Progress; and Pramath Sinha, founding Dean of the Indian School of Business. (Sunita Sohrabji photos)

“Four hundred million people still have no access to energy,” said Indian Ambassador to the U.S. Arun Singh, during the July 24 panel discussion titled “The Future of India,” and moderated by M.R. Rangaswami. Singh noted that renewable energy projects could contribute massively towards India’s aim of an annual economic growth rate of eight to 10 percent.

The Modi administration has established targets of creating 100 gigawatts of solar energy and 175 gigawatts of renewable energy from all sources over the next decade, presenting huge opportunities for U.S. companies and investors, noted Singh. Defense cooperation will also help trade between the two countries grow from its present $100 billion to $500 billion over the next decade, predicted Singh.

The challenge of middle class growth in India presents a huge opportunity for U.S.-India engagement, said Neera Tanden, president of the Center for American Progress, a Washington, D.C. think-tank. Tanden, formerly one of the highest-ranking Indian Americans in President Barack Obama’s administration, noted that quality primary education could be a key contributor to future economic growth of the country.

Economic growth must be inclusive to all of India’s population, said Tanden, noting that countries where wealth is exclusive to a select few tend to have massive political destabilization. India could be a role model to the world if it creates a stable middle class with little political unrest, visualized Tanden.

Arun Kumar, Assistant Secretary of Commerce for Global Markets and Director General of the U.S. and Foreign Commercial Service, said a community college in each of India’s 600 districts could create a massive skilled labor force. Community colleges in the U.S. could partner with their Indian counterparts, he added.

“Silicon Valley could be the epicenter of the synergy between U.S. and India,” said Kumar, adding that Obama opined on his first visit to India in 2010 that the India-U.S. relationship is the most important partnership of the 21st century.

“Our goals mirror each other; the U.S. must be invested in India’s growth and vice versa,” said Kumar, who – in January – accompanied Obama on his second visit to India.

Entrepreneurship must be flowed down, elaborated Kumar, adding that young innovators must be given access to capital to be job creators rather than job seekers.

Sinha noted that American support for Indian higher education has created some of the nation’s best higher institutions of learning, and added that the ISB “would not be the institution it is without the support of people in this room.”

The Massachusetts Institute of Technology was key to setting up IIT Kanpur, said Sinha. In its first decade, IIT Kanpur – founded in 1959 – was managed by a consortium of nine U.S. universities, including MIT, UC Berkeley, Caltech, Princeton and others.

The numbers of students needing education in India is overwhelming, noted Sinha, explaining that 25 million more children will be added to school rosters over the next decade, requiring one million more teachers to educate them. 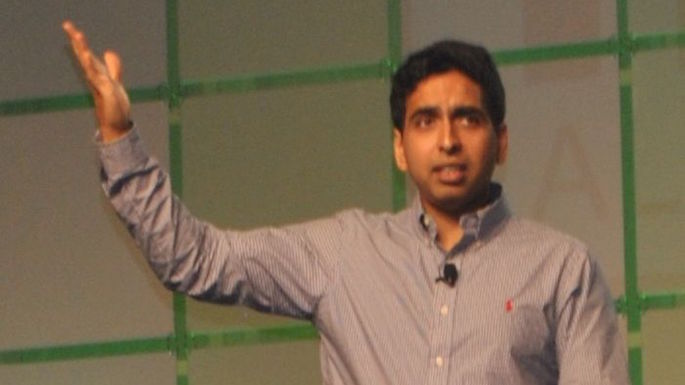 Salman Khan, founder of the Khan Academy, gave a keynote address at the IIT Global Leadership Conference. Khan initially created the videos for the online school in his walk-in closet. (Sunita Sohrabji photos)

On a trip home for the holidays, Khan — a hedge fund analyst at the time — talked to a cousin who was slow in math and was placed in a class for slow learners. So he started tutoring his cousin over the phone.

At first, it was difficult. “She had convinced herself that she couldn’t learn math,” said Khan. But over time, his cousin began to excel. “I became a tiger cousin,” the 38-year-old entrepreneur told a packed auditorium, adding that he called his cousin’s school and asked the administration to let her re-take a critical test.

Word got around the family circle that free tutoring was being offered, and Khan soon found himself tutoring 15 relatives. He started creating videos for his students, with quizzes for self-learning. At a dinner party, a friend advised him to post the videos on YouTube.

“I hated the idea,” said Khan, scoffing off YouTube as a medium for videos of cats playing pianos.

But his cousins told him that they preferred the videos to phone tutoring as they could play them over and over and learn at their own pace. So Khan began to upload videos he created in the walk-in closet of his home.

“Soon it became clear to me that people who were not my relatives were watching the videos,” said Khan. Kids and parents started sending him praises; one mother of a child with learning disabilities said she was praying for him.

“At my day job – an analyst for a hedge fund – I was not used to people praying for me,” he said, evoking laughter from the audience.

Initially, the Khan Academy was supported entirely by small donations. At his darkest moment, as the family was going broke, Khan received a $10,000 check from Ann Doerr, wife of Kleiner Perkins venture capitalist John Doerr.

Doerr told Khan over an Indian buffet lunch that she and her children loved the Khan Academy and asked the founder how he was supporting himself.

Khan got his second break when Microsoft founder Bill Gates mentioned the Khan Academy at a meeting of the Aspen Institute. The Gates Foundation and Google began supporting the Khan Academy in 2010.

“The information revolution has created a special time in history. We can take education – which has always been scarce and a delineator of the haves and have-nots – and make it a fundamental human right,” stated Khan, noting that his mission for the academy is “a free world-class education for anyone, anywhere.” 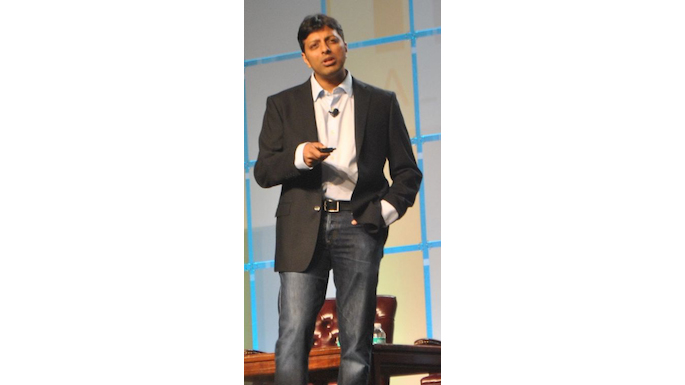 Amazon, which aims to be the world’s most “customer-centric” company, launched in India on June 5, 2013. In 24 months, Amazon India has gained traction to become the country’s most-visited e-commerce site.

“We want to transform the way India buys and sells,” said Amit Agarwal, vice president and country manager for Amazon India, at a keynote address July 24. Agarwal, an IIT Kanpur alumnus, said Indian consumers are no different from American consumers: all want lots of selections at low prices, delivered quickly and reliably.

In March, Amazon India launched “Kirana Now,” a service that allows neighborhood stores to deliver essential items to their customers within two to three hours.

“It is still ‘Day 1.’ The alarm clock hasn’t gone off yet,” said the Bangalore-based Agarwal with a laugh. “This is the start of a very long marathon, with a lot of innovation on the road ahead,” he said.

“I can’t rationalize why anyone with imagination would work for a big company,” said Khosla, adding: “What bothers me is people who know what they want to do but don’t do it.”

“Innovation takes people who are operating at the edges of a system,” said the founder of Khosla Ventures, noting that seldom has great innovation come from within a large company, which is ruled by traditions and biases.

“Out there, at the edge where things are un-gelled, the best innovation happens there,” said Khosla, noting that this century’s best ideas have been generated by small, entrepreneurial companies which have re-thought the problem.

“Technology is the greatest tool you have to uplift people,” he said. “Today, 500 million people in the world live a resource-rich lifestyle. Seven billion people want that same standard of living, but we just don’t have the resources.”

Technology can multiply resources by 10 times, said Khosla, noting that the employment of technology in agriculture can produce 10 times the amount of food on a plot of land. New technologies have enabled drivers to travel 10 times further on a gallon of gas, said the entrepreneur, taking a dig at public transportation which – he said – was “a very bad idea.” Khosla favors driverless cars over buses.

Technology could also transform the delivery of health care at 1/100th of the cost, opined Khosla. “Humans should not have a role in diagnosis, prescribing medications and monitoring progress,” he stated, adding that physicians are largely only necessary for the human connection.