Taking a not-so-subtle jibe at Srinivasan's son-in-law Gurunath Meiyappan, Thakur said the erstwhile BCCI president should share a list of suspected bookies even with his family members. 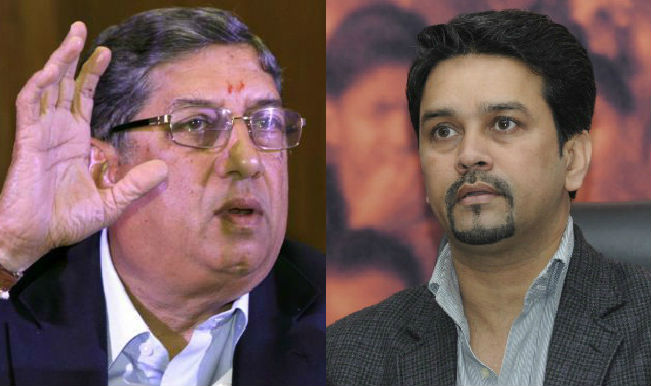 Board of Control for Cricket in India (BCCI) secretary Anurag Thakur blasted International Cricket Council (ICC) chairman N. Srinivasan on Monday through a public letter and “requested” him to issue “a list of suspected bookies”. He also said that Srinivasan should share the list with his own family members “whose involvement in betting has been proved”. Thakur attacked Srinivasan a day after the ICC issued an advisory to Thakur to avoid meeting suspected bookies. Also Read - MS Dhoni Hopes to Play Last T20 Match in Chennai

Here is a copy of my letter to Mr N Srinivasan. @BCCI pic.twitter.com/HgDpyoBbhE

“The BCCI has received intimation from the ICC ostensibly under your direction that I should keep away from one Mr. Karan Gilhotra who is a ‘suspected bookie’. The intimation further states that the information is further unverified,” Thakur wrote in the letter, which was made public on Twitter on Monday.  “I only wish that you had shared the list of ‘unverified suspected bookies’ with me and other colleagues so that we could identify such persons and keep away from them,” he added.

Thakur defended his meetings with Gilhotra claiming that he has known this person for some time as he has been “active in political and cricketing activities in Punjab and adjacent states” and had no clue about his “activities as a suspected bookie”. Thakur also said that intimation to ICC about his meeting with Gilhotra was done by Neeraj Gunde, who he said “operates on your behalf”.

He said the ICC advisory, “based on unverified information”, was issued on Srinivasan’s behest on the eve of the BCCI working committee meeting held in Kolkata on Sunday. “It was intended to be a counter-offensive since Srinivasan had not reconciled with my election as BCCI secretary,” Thakur said in the letter.

Taking a not-so-subtle jibe at Srinivasan’s son-in-law Gurunath Meiyappan, Thakur said the erstwhile BCCI president should share a list of suspected bookies even with his family members. “I would request at least now share with me or other colleagues in BCCI the list of suspected bookies in India so that we may keep away from them. You may also share this information with your family members whose involvement in betting has been proved,” he wrote.