Here are the latest betting tips on IPL 2015. Put your money where you can earn the most. 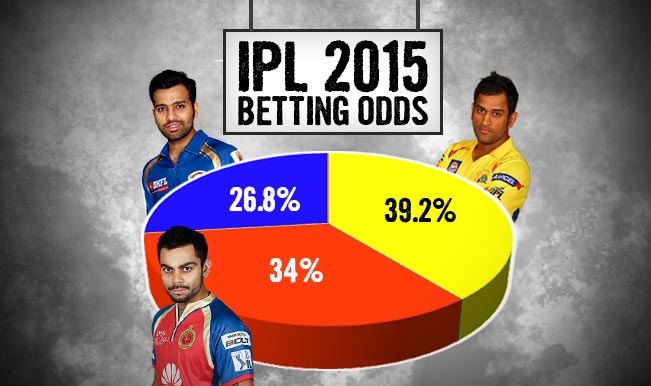 Chennai Super Kings and Royal Challengers Bangalore lock horns for the third time in the Indian Premier League (IPL) 2015 at the JSCA International Cricket Stadium, Ranchi on Friday. A place in the final and a mouth-watering clash against 2013 champions Mumbai Indians at the Eden Gardens in Kolkata await the winners of this clash on Sunday. Before the start of the season, the odds were strongly stacked in favour of CSK, RCB, MI and last season’s runners-up Kings XI Punjab to win the trophy this time. Also Read - Arjun Tendulkar, Son of Sachin Tendulkar, Gets Maiden Wicket on Debut For Mumbai in Syed Mushtaq Ali T20 Trophy | WATCH VIDEO

However, the team headed by George Bailey humiliatingly finished last in the table just three wins. The other three have lived up to their expectations but the judging by the form the odds have slightly shifted coming into the last two matches in the eighth edition of the glamorous T20 tournament. Also Read - IPL Chairman Brijesh Patel Announces Player Retention and Trading Window Deadline For 2021 Season

Starting the tournament on a disappointing note, the Mumbai Indians stormed into the playoffs with just two losses in 10 matches. The Rohit Sharma-led side then trumped two-time champions CSK by 25 runs in Qualifier 1 and are slight favourites ahead of RCB to lift the trophy. However, British bookies think otherwise and have backed CSK to beat the Bengaluru outfit and progress into the final. Also Read - IPL: Delhi Capitals Rope in Pravin Amre as Assitant Coach For Next Two Seasons

CSK vs RCB: Betway and MatchBok are offering the best odds in the UK for Virat Kohli and co to progress into the final at 5/6, while most betting firms have placed the bar at 4/5. The MS Dhoni-led side on the other hand come into this game as underdogs with BoyleSports offering prices at 21/20 and MatchBook.

One can expect an explosive affair in the final at the Eden Gardens and MI will perhaps be bookies’ favourite to beat their opposition.  Should the Super Kings earn their ticket to Kolkata, they will be wary of the fact that they lost to the same opposition in 2013 despite MS Dhoni’s heroics. The bookies strongly back the two-time champions to achieve success and become champions for an unprecedented third time. Coral has taken a bold step of placing the odds at 5/2 for every £20 on CSK winning the trophy.

SportingBet’s favourite are the Mumbai Indians as they offer 7/5 for every £50 but Matchbook offer the same for every £25. The boldest of them all is Bwin.com with a 39/19 on RCB lifting the trophy for the first time.