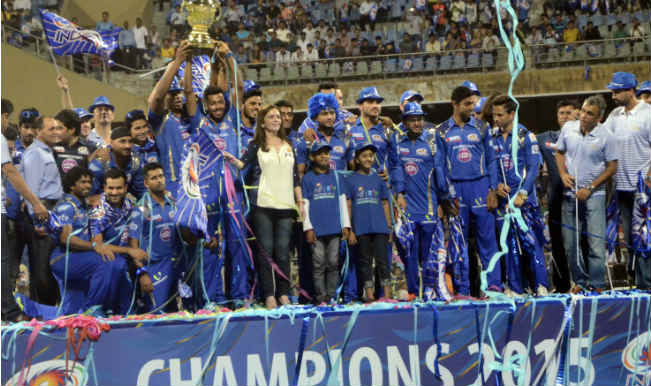 Mumbai, May 25: A victorious Mumbai Indians team celebrated their Indian Premier League (IPL) 2015 triumph along with a large number of fans who turned up to cheer for the team at the Wankhede stadium here on Monday. Each and every member of the winning squad – from players to support staff – entered the stadium and took part in a victory lap with the team flag in their hands and blue hats on their heads as fans shout “Mumbai Mumbai” to thank their boys. Also Read - IPL 2021: Mumbai Indians Likely to Target Umesh Yadav, Sandeep Lamichhane, Tom Curran in Upcoming Mini Auction in February

Sachin Tendulkar, Harbhajan Singh, Rohit Sharma, Lasith Malinga, Ricky Ponting, Anil Kumble, Kieron Pollard and other members posed with the trophy in the podium as fireworks and music made the atmosphere a memorable one not only for the team but also for the thousands of fans present there. Also Read - Jasprit Bumrah Pays Tribute to Mumbai Indians Teammate Lasith Malinga, Says IPL Won't be Same Without You

A far too superior Mumbai Indians crushed Chennai Super Kings under the weight of a daunting asking rate on Sunday to lift the coveted IPL title for the second time, in a virtual replay of the final between the two sides in 2013 at the same venue Eden Gardens in Kolkata. Team co-owner Nita Ambani, during the celebrations, said: “I was unaware of cricket a few years ago. Now Mumbai Indians is the world to me. We thank all fans for their support. East or West, Mumbai is the best.”

A smiling Tendulkar said: “Namaste Mumbai. It’s great to be back here with the IPL trophy. I enjoyed the journey with Mumbai Indians. Credit to the entire team, support staff and you all fans for having faith in us after we started off the season on a wrong note. Thank you all.”

A thrilled skipper Rohit Sharma said: “More than anything, I like Mumbai. This is the ground where I started playing cricket. The support throughout the IPL has been fantastic. Without a team effort, this would not have been possible. I feel at the top of the world.”

West Indian Kieron Pollard said: “Mumbai has been home away from home for me. I try to deliver for the team as much as possible. Great to see you fans turn up again, Thank you all.”