Chennai Super Kings vs Rajasthan Royals, IPL 2015 Match 47 Preview: CSK and RR aim to seal the deal for a spot in the Playoffs

The teams are almost through to the Playoffs but complex scenarios can spoil their fun so a win is a must. 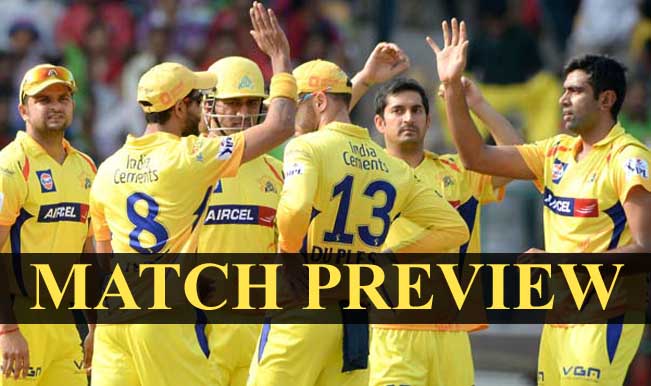 Chennai, May 9: League leaders Chennai Super Kings (CSK) and second placed Rajasthan Royals will look to cement their positions in order to qualify for the play-offs of the Indian Premier League (IPL) when they meet each other in an exciting encounter at the M.A. Chidambaram Stadium here on Sunday. With seven wins from 11 matches, two-time champions Chennai are on top of the points table, while Rajasthan also have 14 points but the inaugural edition champions have played one extra game. Also Read - IPL 2019: Ambati Rayudu-Dwayne Bravo Have Fun After MS Dhoni's CSK Beat RR | WATCH VIDEO

However, both the teams have suffered defeats in their previous games and they will look to acquire some amount of consistency as the Twenty-20 cricket tournament nears its end. While Chennai lost to Mumbai Indians by six wickets on Friday, Rajasthan fell short by seven runs in pursuit of Sunrisers Hyderabad’s 201/4 on Thursday. Also Read - Match Presenter Murali Karthik Opts Not to Ask Question on MS Dhoni's Public Outburst as Skipper Gives Cue | WATCH

Chennai’s over-reliance on the top three batsmen — Dwayne Bravo, Brendon McCullum and Suresh Raina — was exposed by Mumbai, who restricted the home team to 158/5. And in reply, Mumbai cantered home with not much difficulty, becoming the first visiting team to taste a win at the M.A. Chidambaram Stadium in this season.

Having registered a comfortable eight-wicket victory in their previous meeting on April 19, Rajasthan will hope to continue what they and Mumbai did to halt the rampaging Chennai outfit. Rajasthan, too, have their own problems in death bowling even if Tim Southee, Dhawal Kulkarni, Stuart Binny, James Faulkner are bowling their hearts out, picking up wickets at crucial moments.

On the other hand, Chennai boast of two excellent medium pace bowlers in their ranks who have been simply brilliant in this season. Purple Cap holder Ashish Nehra and the No. 2 in the list of most wicket-taking bowlers, Dwayne Bravo ensure that Chennai don’t concede too many runs. Chennai must be relieved that their off-spinner Ravichandran Ashwin made a resounding comeback following a finger injury. He scalped the two crucial wickets of Lendl Simmons and Parthiv Patel while opening the bowling.

To match Chennai’s bowlers might, Rajasthan do have the pedigree with opener Ajinkya Rahane being a captain’s delight. The 26-year-old right-handed batsman from Mumbai has been the key man from the start of the season and dons the orange cap for the most runs (438) in the competition so far. He has been well supported by his skipper and opening partner Shane Watson, followed by Australian Steven Smith and Indian youngsters Sanju Samson, Karun Nair and Deepak Hooda. They will look to muster as many runs as they can so that their bowlers can defend.