Watch the live streaming of the CSK vs RR match here. 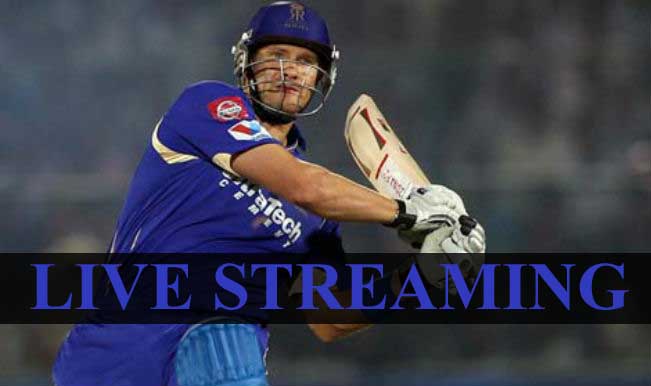 Chennai Super Kings (CSK) will take on Rajasthan Royals (RR) in match 47 of Indian Premier League (IPL) at the M. A. Chidambaram Stadium, Chennai. The CSK vs RR clash is scheduled to start at 8.00 pm IST. You can catch the free live streaming of the CSK vs RR match exclusively on the official website of Star Sports.com. The Chennai Super Kings vs Rajasthan Royals match will be live telecast by Sony Six and Sony Max. The match coverage is also available on the Hotstar mobile app.  Also Catch the updated Points Table of Pepsi IPL 2015. Also Read - IPL 2019: Ambati Rayudu-Dwayne Bravo Have Fun After MS Dhoni's CSK Beat RR | WATCH VIDEO

With seven wins from 11 matches, two-time champions Chennai Super Kings are on second on the the points table, while Rajasthan also have 14 points but the inaugural edition champions have played one extra game. However, both the teams have suffered defeats in their previous games and they will look to acquire some amount of consistency as the Twenty-20 cricket tournament nears its end. Also Read - Match Presenter Murali Karthik Opts Not to Ask Question on MS Dhoni's Public Outburst as Skipper Gives Cue | WATCH

While Chennai lost to Mumbai Indians by six wickets on Friday, Rajasthan fell short by seven runs in pursuit of Sunrisers Hyderabad’s 201/4 on Thursday. Chennai’s over-reliance on the top three batsmen — Dwayne Bravo, Brendon McCullum and Suresh Raina — was exposed by Mumbai, who restricted the home team to 158/5.

And in reply, Mumbai cantered home with not much difficulty, becoming the first visiting team to taste a win at the M.A. Chidambaram Stadium in this season. Having registered a comfortable eight-wicket victory in their previous meeting on April 19, Rajasthan will hope to continue what they and Mumbai did to halt the rampaging Chennai outfit. (With inputs from agencies)