Chennai Super Kings vs Royal Challengers Bangalore Prediction: Results of all CSK vs RCB matches played in IPL so far

Super Kings have won 11 of the 19 matches while RCB has only managed to win on 7 occasions and 1 game was abandoned due to rain. 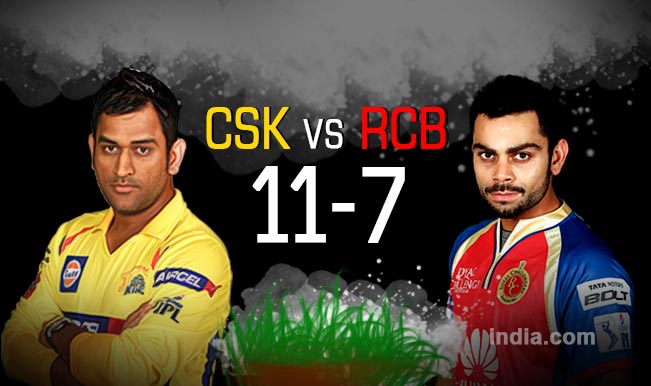 Royal Challengers Bangalore (RCB) will take on the Chennai Super Kings (CSK) in the Qualifier 2 match of the IPL 2015 at the JSCA International Cricket Stadium, Ranchi. These two teams have previously met on 19 occasions including all the editions of Indian Premier League and if records are anything to go by then the CSK emerge as the sole favorites to run riots in this game. Super Kings have won 11 of the 19 matches while RCB has only managed to win on 7 occasions and 1 game was abandoned due to rain. But as it is said each day is a new day on the cricket field, we leave the match prediction on the cricket lovers around. Also Read - IPL 2021: MS Dhoni-Led Chennai Super Kings Strategy at Upcoming IPL 14 Mini-Auction in February

Since this match is going to be a knock out game, these two teams have faced each other in 3 knock out games and once again the Chennai Super Kings have got the better of RCB on 2 of those occasions with the only success for RCB coming in the semis of the 2009 edition of the IPL. These two teams have played some of the greatest matches in the history of the IPL over the years and share one of the most elaborated rivalries in the tournament, a fact that makes this fixture that much more exciting. Also Read - IPL 2021: Pat Cummins Set to Earn More Money Than MS Dhoni, Rohit Sharma as KKR Pacer Gets Retained Ahead of IPL 14 Mini-Auction

The highest total ever posted in a RCB vs. CSK game was by Chennai Super Kings when they chased sown the total of 205 set by RCB due to a brilliant second last over wherein Albie Morkel had hit Virat Kohli for 28 runs. The lowest total ever between the two teams has been by Chennai Super Kings but that came in an 8 over match where CSK only manages 82 runs, otherwise it is RCB’s 85 posted in the second edition of the IPL. The biggest margin of victory has been 92 runs when CSK humiliated the Royal Challengers in their 1st of the 3 encounters in 2009.

The highest Score registered by a batsman in these encounters is 95 by Murali Vijay in the finals of the 2011 edition. Suresh Raina has received most number of Man of the match awards in these encounters which includes both the previous games in this season of the IPL. The best bowling figure too came in this season itself when Ashish Nehra picked up 4/10 in his 4 overs at the M Chidambaram.