CSK are on top of the points table as they are through to the Playoffs along with KKR. 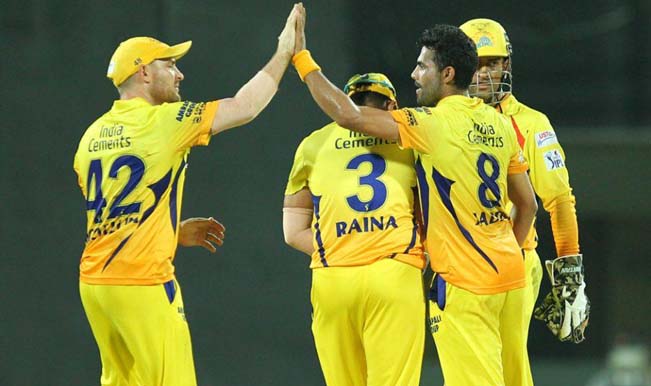 Chennai, May 10: Chennai Super Kings (CSK) climbed to the top of the Indian Premier League (IPL) points table with a 12-run victory over Rajasthan Royals in a league match at the M.A. Chidambaram Stadium here on Sunday. Chasing 158, Royals were restricted to 145 for nine in 20 overs. CSK improved to 16 points from 12 matches, keeping Royals in the third spot with 14 points after 13 games. Also Read - IPL 2019: Ambati Rayudu-Dwayne Bravo Have Fun After MS Dhoni's CSK Beat RR | WATCH VIDEO

Royals began their run-making process sedately with openers Ajinkya Rahane (23) and Shane Watson (28). They mixed caution with aggression to build a strong platform for their team. Just as it seemed they have settled into a nice rhythm Rahane departed in the sixth over dismissed by Mohit Sharma. No.3 batter Steve Smith (4) also didn’t last long as Royals slumped to 48 for two in the eighth over. But they received a bigger jolt when Watson had to depart, caught brilliantly by an acrobatic Dwayne Bravo at long on off the bowling of Ravindra Jadeja in the 10th over. Also Read - Match Presenter Murali Karthik Opts Not to Ask Question on MS Dhoni's Public Outburst as Skipper Gives Cue | WATCH

Rajasthan‘s situation worsened 11 balls later. Jadeja struck again to dismiss Karun Nair (10) to reduce Royals to 75 for four. The asking rate steadily went up and Royals needed 73 runs off the last seven overs. But they just couldn’t muster the big hits needed to chase down the total. Earlier, Brendon McCullum’s 81 off 61 balls lifted Chennai Super Kings (CSK) to a fighting total of 157/5. McCullum hit four sixes and seven fours and joined hands with Faf du Plessis (29) for a 101-run stand in 76 balls for the third wicket that was the driving force behind Chennai’s competitive score.

After electing to bat first, Chennai got off to a poor start, losing aggressive opening batsman Dwayne Smith (6) and ever-reliable Suresh Raina (3) inside four overs. While left-arm spinner Ankit Sharma removed West Indian Smith, caught by James Faulkner, left-hander Raina too offered a catch to Faulkner off pacer Chris Morris to leave the hosts in spot of bother at 15/2. Charismatic right-hander McCullum first tried to settle down, waiting for weak deliveries to pounce upon, like he did against off-spinner Pravin Tambe, who got hit for two sixes in the sixth over.

However, du Plessis ran himself out and afterwards McCullum also perished, offering a catch to Ankit for Morris’ second wicket. Morr is bagged his third after dismissing Pawan Negi for two. Afterwards, skipper Mahendra Singh Dhoni (not out 13) and Dwayne Bravo (not out 15) raised 28 runs in the final 15 deliveries of the innings to take Chennai to the decent total. For Rajasthan, South African Morris was the best bowler, picking three wickets for just 19 runs in four overs.