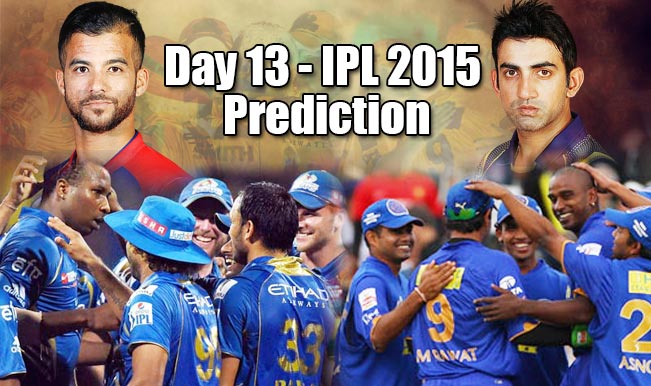 The high-octane clashes last weekend got over but the entertainment continues on Day 13 of IPL 2015 with upbeat Delhi Daredevils (DD) taking on the defending champion Kolkata Knight Riders (KKR) on a single match day. The eighth season of Indian Premier League is turning out to be a dreamy affair for Rajasthan Royals (RR) as they continued with their winning streak on Day 12. They demolished the most consistent side of the tournament Chennai Super Kings (CSK) by eight wickets to register their fifth straight victory this season. With this win, Royals maintained their top place in the IPL 8 points table. Meanwhile, Sunday proved to be great day for Mumbai Indians (MI) as they notched their first IPL 8 win, beating Royals Challengers Bangalore (RCB) by 18 runs. They climbed one rung up the points table to seventh place. Catch the updated Points Table of Pepsi IPL 2015 here. Also Read - MATCH HIGHLIGHTS IPL 2020 Match 10: Saini, De Villiers Star Royal Challengers Bangalore Beat Mumbai Indians in Super Over Thriller

Chasing a 157-run target for victory, Royals didn’t blink even once with the experienced opening pair thrashing the hapless CSK bowlers, putting on a 144-run opening partnership, to stroll to the target with 10 balls to spare. With the comfortable victory, Royals maintained their 100 percent win-record in the campaign, perched at the top of the standings with a maximum 10 points from five games.

After two opening losses in this edition of the cash-rich league, the Jean-Paul Duminy-led side bounced back with two straight wins to put its campaign back on track. It was not that DD were playing bad cricket but probably luck had deserted them in the first two matches, which they lost by close margins. Fortunes turned in their third game against King XI Punjab when the batsmen chased down a 166-run target. Also Read: Match Preview of Delhi Daredevils vs Kolkata Knight Riders  here.

Daredevils pulled off a thrilling win against Sunrisers Hyderabad by four runs, as Australian fast bowler Nathan Coulter-Nile scripted the victory with a brilliant last over, giving away only 5 runs when 10 were needed by the Sunrisers. KKR beat Kings XI Punjab by four wickets on Saturday courtesy of an aggressive knock from Jamaican all-rounder Andre Russell, who hammered his way to a 36-ball 66.

Daredevils have won two of their last four matches. But Daredevils are sure to face a stern test on Monday with an in-form Russell as their main threat. KKR skipper Gautam Gambhir, having already tonked two fifties, and Suryakumar Yadav are also in great power-hitting form. Delhi will hope their skipper, South African Jean Paul Duminy maintains his good form in the game.

Australian pacer Nathan Coulter-Nile and South African leg-spinner Imran Tahir will lead the bowling pack and so far they have been able to keep their opponents on a tight leash. The leg-spin duo of Tahir and Amit Mishra have been Daredevils’ bowling trump cards so far. The Match 17, Delhi Daredevils vs Kolkata Knight Riders will take place at the  Feroz Shah Kotla, Delhi. The match will start at 8.00 pm IST with the live coverage and telecast done on Sony Max and Sony Six for Indian viewers. Check Out: IPL 2015 Schedule – All Match Fixtures and Complete Time Table of IPL. Inputs from agencies.