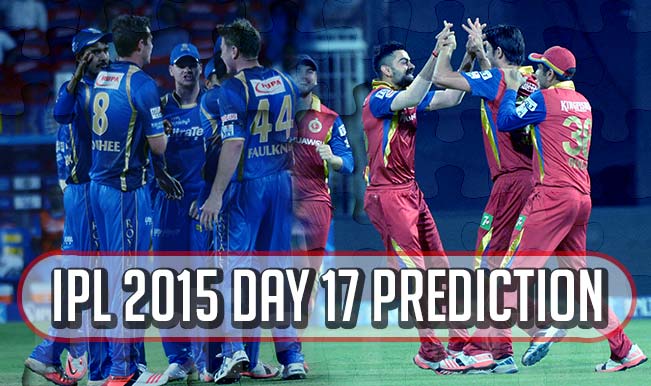 Day 16 of the Indian Premier League (IPL) 2015 witnessed one (somewhat) extraordinary feat from the Delhi Daredevils while normal services resumed for Mumbai Indians. The national capital outfit were looking to end their nine-match unbeaten run in front of their supporters at the Feroz Shah Kotla ground. The side led by JP Duminy set a target of 191 and tore through the visiting batting lineup, restricting them to 153 runs. Day 17 of IPL 8 will see league leaders Rajasthan Royals take on strugglers Royal Challengers Bangalore in Match #22 at the Sardar Patel Stadium. Shane Watson’s side have surged to the top of the table with five wins out of six; losing their previous one to Kings XI Punjab after a super over. Meanwhile, Virat Kohli’s side have looked dreadful, despite boasting the likes of AB de Villiers and Chris Gayle. Will fortunes turn when the two sides clash at Ahmedabad? Click here to check the points table if IPL 8. Also Read - Virat Kohli Responds to Harry Kane on Asking Him For a Place in RCB

An impressive all-round display helped Delhi Daredevils overpower Mumbai Indians by 37 runs in an Indian Premier League (IPL) match at the Ferozeshah Kotla stadium on Thursday. Chasing a formidable target of 191, Mumbai managed only 153 for nine. With the win, Daredevils improved to six points from six matches, occupying the fourth spot. The win also snapped Daredevils’ nine-match losing streak at their home ground. Mumbai succumbed to their fifth loss in six matches to drop to the last spot in the standings. Mumbai’s chase got an encouraging start through Lendl Simmons (15) and Parthiv Patel (28). But just when they were looking to increase the run rate, Simmons departed in the fifth over. To make matters worse, Patel also went back to the pavilion, caught by South African Imran Tahir in the deep off the bowling of Sri Lankan Angelo Mathews. With both the openers back in the hut, the momentum of Mumbai’s batting vanished. The 2013 champions could manage only 153 in 20 overs and returned to the bottom of the table. Ajinkya Rahane leads the Orange Cap race.

Royals, the champions of the first edition of the tournament in 2008, have again begun punching above their weight with their astutely yet frugally assembled team, led by Australian Shane Watson and ably supported by James Faulkner, Steve Smith and Ajinkya Rahane. They have collected five victories from six outings to sit atop the standings. RCB’s desperation to win should give them added motivation to turn the tide of their modest performances. Their game plan in any of the matches hasn’t clicked so far and they might well need to think out of the box to outwit a street smart Royals side. Will dark horse Yuzvendra Chahal manage to steal the Purple Cap off Imran Tahir?

Match Prediction, Rajasthan Royals vs Royal Challengers Bangalore: RR have simply dazzled the crowd while RCB have been nothing short of dreadful following their positive start in their first match against the Kolkata Knight Riders. Shane Watson’s side lost for the first time in six matches against Kings XI Punjab but that is unlikely to derail their juggernaut against the Bengaluru outfit. Ajinkya Rahane, Steve Smith and Shane Watson will be expected to take the bowlers to the cleaners while Mitchell Starc will be raring to go against his compatriots. Overall, an exciting match awaits with another win for the Royals firmly on the cards.   Check Out: IPL 2015 Schedule – All Match Fixtures and Complete Time Table of IPL.