KKR defeated KXIP to top the points table while SRH defeated DD to keep their qualification chances alive on Day 32. 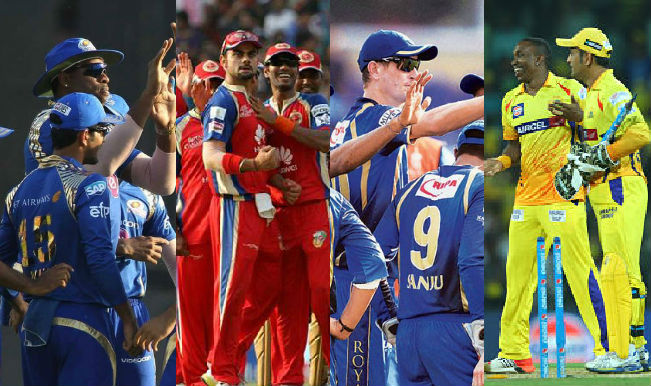 Andre Russell (51 in 21 balls), Yusuf Pathan (29 from 19 balls) and Piyush Chawla’s 11-ball 18 propelled Kolkata Knight Riders (KKR) to the top of the Indian Premier League (IPL) table as they beat Kings XI Punjab by one wicket and a ball to spare. The Knights have 15 points from 12 games while the Kings are still at the bottom of the standings with only two wins from 11 contests. In answer to KXIP’s 183/5, KKR finished with 184/9 with Russell top scoring with 51 from 21 balls. Anureet Singh and Gurkeerat Singh Mann picked two wickets each for the losers.

Kedar Jadhav’s valiant unbeaten knock of 63 in 34 balls went in vain as Delhi Daredevils lost to Sunrisers Hyderabad by six runs in an Indian Premier League encounter at the Shaheed Veer Narayan Singh. After winning the toss and choosing to bat, Sunrisers posted 163/4 thanks to Moises Henriques’ unbeaten knock of 74 in 46 balls. In reply, Daredevils chase started with Quinton de Kock’s pacy 50 off 31 deliveries before Jadhav’s explosion at the end nearly helped them reach the shore.

Having beaten table-toppers Chennai Super Kings convincingly, Mumbai Indians will be high on confidence and aim to hold on to their spot among top-four when they take on a strong Royal Challengers Bangalore (RCB) in the return-leg of the Indian Premier League (IPL) at the Wankhede Stadium. The teams earlier met in the first-leg on April 19 where the Mumbai-based team came out victorious, beating RCB by 18 runs. Put in to bat, Mumbai posted a massive 209 runs on the board. RCB came close to the target but fell short, handing the visitors their first win of the season.

With five back-to-back wins, Mumbai are currently placed fourth in the standings with 12 points from 11 games, having won six and lost five, whereas RCB are placed one spot behind MI with 11 points from 10 games, with five wins and four losses. The Match 47, Mumbai Indians vs Royal Challengers Bangalore will take place at the Wankhede Stadium. The match will start at 8.00 pm IST with the live coverage and telecast on Sony Max and Sony Six for Indian viewers.

League leaders Chennai Super Kings (CSK) and second placed Rajasthan Royals will look to cement their positions in order to qualify for the play-offs of the Indian Premier League (IPL) when they meet each other in an exciting encounter at the M.A. Chidambaram Stadium.  both the teams have suffered defeats in their previous games and they will look to acquire some amount of consistency as the Twenty-20 cricket tournament nears its end.

While Chennai lost to Mumbai Indians by six wickets on Friday, Rajasthan fell short by seven runs in pursuit of Sunrisers Hyderabad’s 201/4. Chennai’s over-reliance on the top three batsmen — Dwayne Bravo, Brendon McCullum and Suresh Raina — was exposed by Mumbai, who restricted the home team to 158/5. And in reply, Mumbai cantered home with not much difficulty, becoming the first visiting team to taste a win at the M.A. Chidambaram Stadium in this season.

With seven wins from 11 matches, two-time champions Chennai are on top of the points table, while Rajasthan also have 14 points but the inaugural edition champions have played one extra game. Purple Cap holder Ashish Nehra and the No. 2 in the list of most wicket-taking bowlers, Dwayne Bravo ensure that Chennai don’t concede too many runs. To match Chennai’s bowlers might, Rajasthan do have the pedigree with opener Ajinkya Rahane being a captain’s delight. The Match 45, Chennai Super Kings vs Rajasthan Royals will take place at the M Chidambaram Stadium. The match will start at 4.00 pm IST with the live coverage and telecast on Sony Max and Sony Six for Indian viewers.(With inputs from Agencies). Check Out: IPL 2015 Schedule – All Match Fixtures and Complete Time Table of IPL.