Sixth placed MI desperately seek a win against second ranked KKR to stay in the hunt. 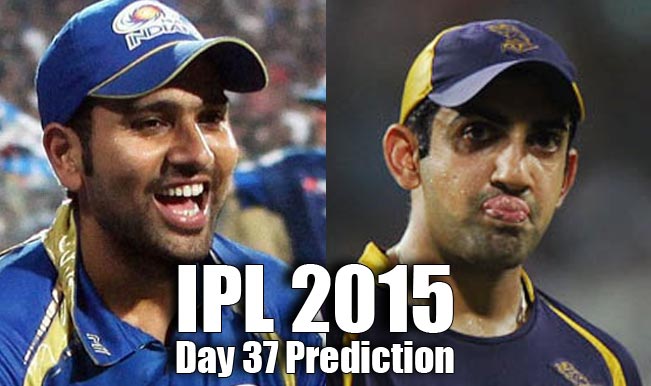 The Day 36  of IPL 2015 saw Royal Challengers Bangalore facing defeat at the hands of bottom-placed Kings XI Punjab in a rain-marred match, While Punjab being already out of the race for qualifications playoffs, RCB were hurt by the defeat as they remained placed at the fifth spot of IPL 2015 points table with 13 points from 12 matches. On the Day 37, Mumbai Indians will take on defending champions Kolkata Knight Riders at the Wankhede Stadium. Sixth placed MI desperately seek a win against second ranked KKR to stay in the hunt. Also Check: Updated Points Table of Pepsi IPL 2015. Also Read - MI vs KKR Highlights, IPL 2020 Match 32, Abu Dhabi: Quinton De Kock, Rahul Chahar Star as Mumbai Thrash Kolkata by Eight Wickets

Bottom-placed Kings XI Punjab (KXIP) defeated Royal Challengers Bangalore (RCB) by 22 runs in a rain-curtailed Indian Premier League (IPL) match at the Punjab Cricket Association Stadium (PCA). Punjab remained at the foot of the standings with six points from 13 matches despite the win. Bangalore stayed at the fifth spot with 13 points from 12 matches. Chasing a target of 107 runs in 10 overs, RCB managed only 84 for six. They sent their two destructive batsmen West Indian Chris Gayle and Virat Kohli to open the innings. Batting first, KXIP posted 106 on board with Bengal’s right-handed batsman Saha making up most of the opportunity of batting up the order, hitting 31 in just 12 balls. His knock included five fours and a six.

Emphasising on the importance of their IPL match against Kolkata Knight Riders, Mumbai Indians coach Ricky Ponting today termed the clash against the defending champions as a “virtual final” for his team. While the Knight Riders are just one win away from entering the play-off stage of the tournament, MI need to win tomorrow’s match to boost their chances of advancing. Although the Mumbai outfit might still make the play-offs even after losing, provided the other results pan out in its favour, Ponting stressed on the importance of giving 100 per cent against KKR. Both teams earlier met in the opening match of the season on April 8, where home side KKR outplayed Mumbai by seven wickets.

As the business end of the tournament approaches, home side Mumbai Indians after their loss to Royal Challengers Bangalore (RCB) on Sunday slumped to sixth position with 12 points from 12 games, needing to win all two remaining games to qualify for the play-offs. Whereas KKR after a consistent run in the season are placed in the second spot with 15 points from 12 games, needing just one point to book their play in the knock-out stage. Also Read: Kieron Pollard, Andre Russell among five key players for MI vs KKR clash.

The Match 51 of IPL 2015, Mumbai Indians vs Kolkata Knight Riders will take place at the Wankhede Stadium, Mumbai and is scheduled to commence at 8:00 pm IST with live coverage on Sony Six, Sony Six HD and Sony Kix. (With inputs from Agencies). Check Out: IPL 2015 Schedule – All Match Fixtures and Complete Time Table of IPL.