Rajasthan Royals pacer Tim Southee has said that their IPL cricket tournament encounter against Chennai Super Kings will be an exciting affair. 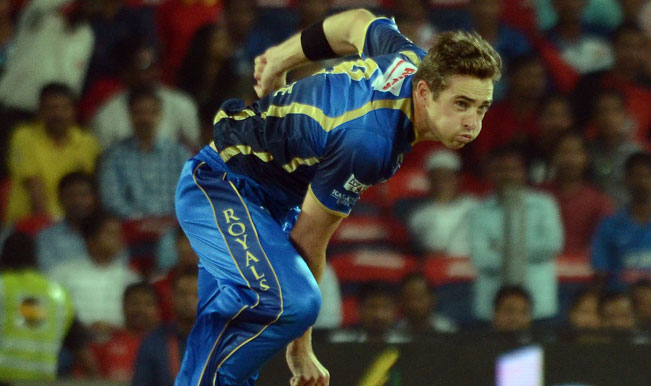 “Yeah, it should be a good game. Both the teams (CSK and RR) are playing some good cricket, and haven’t lost a game so far in the tournament (IPL). It’s different conditions, the teams have changed, there’s been different personnel in the sides now. I think it will be a completely different game tomorrow. But it should be a good one,” Southee told reporters here ahead of their clash with Mahendra Singh Dhoni led Chennai Super Kings (CSK). Also Read - IPL 2021: Sanju Samson Appointed Captain After Rajasthan Royals Release Steven Smith

When asked about any specific strategy will be adopted by Royals to rein in CSK’s innings, he said his team will focus to take some early wickets of the rivals.

“They are a very good side, they have got some good batters, not only at the top but all the way through. There are a very good batting side. We will have to come up with some plans to try and minimise the damage early on,” he added.

CSK has finished last game against Mumbai in 17th over while chasing the target of 183 with six wickets remaining.

Southee when asked about Yellow Brigade’s batting prowess, said,”I think they are a very dangerous side. They are not only strong at the top of the order, they’ve got some very good players throughout the whole order. They’ll be dangerous and we’ll have to be at the top of our game to minimise and take as many wickets as we can to slow them down during the back end of the innings.”

“Obviously, (Brendon) McCullum comes very hard early on, and has had a great last year or so, he is going to be very important to try and stop early on. But it’s not only him, Dwayne Smith as well. He is a very dangerous player, so we have got footage and what not, we will look at it try and come up with some plans to take early wickets,” he said about his New Zealand teammate Brendon McCullum.

When asked about the ‘fitness status’ of his team-mate Shane Watson, he said, “Not too sure, you have got to ask the medical side. I think he trained the last couple of days, so we’ve to wait and see.”