The Indian Premier League (IPL) 2015 saw numerous batsmen rise to the occasion and showcase their quality. Nishad Pai Vaidya picks the top 10 batsmen of the tournament, not in order of their run-tally but more on quality and impact etc. 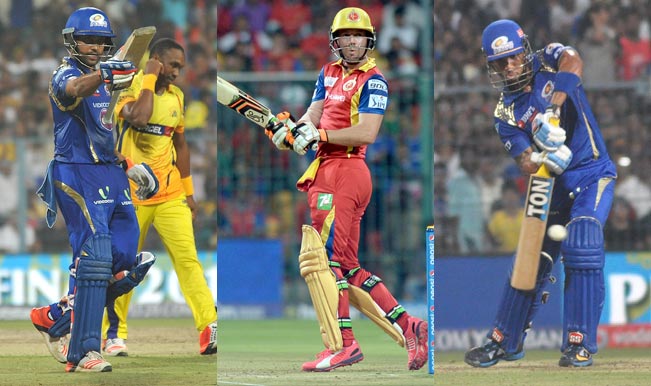 The Indian Premier League (IPL) 2015 saw numerous batsmen rise to the occasion and showcase their quality. Nishad Pai Vaidya picks the top 10 batsmen of the tournament, not in order of their run-tally but more on quality and impact etc. Also Read - Yusuf Pathan Announces Retirement From All Forms of Cricket

This man never ceases to amaze. For sheer quality, class and audacity, AB de Villiers tops the list. The South African played some blistering knocks through the IPL to entertain fans with his mastery. His most notable knocks came against the Mumbai Indians. In their game at Bangalore, he smashed 41 off only 11 balls. And, when they travelled to the Wankhede Stadium, de Villiers duly smashed a ton, unleashing all those uncanny shots.

It started at the Eden Gardens and finished at the Eden Gardens. Rohit Sharma began his IPL 2015 with a classy 98 not out against the Kolkata Knight Riders while opening the batting. For majority of the season, however, he batted down the order. Time and again, Rohit produced those quick-fire innings to give Mumbai Indians the momentum. When his team needed it the most, he rose to the occasion and smashed a fifty in final, which helped set a base for victory.

Lendl Simmons’ inclusion turned around Mumbai Indians’ campaign. Since 2014, he has been in great form in T20 cricket and carried that into this tournament to help his team go all the way. Simmons scored as many as six fifties at the top, which helped his team get a good start. With him at the top, the middle-order did not have a lot of pressure and there was always that calming influence. To cap off the season, he smashed yet another fifty in the final.