Cricket's shortest format is usually said to be suited for the fresh legs and young blood but a number of players in the latest edition of Indian Premier League (IPL) have yet again proved that age is just a number. 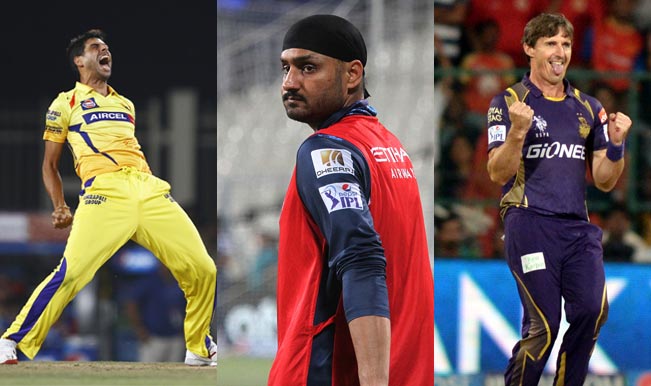 “I have got three Man-of-the-Match awards this season and that says it all. It is not easy for a fast bowler to pick up that many awards in one season. People are noticing it more because I am 36 and a guy at this age is doing something unbelievable in Twenty20s,” the left-armer said. Also Read - IPL 2021: Kolkata Knight Riders Start Season on High With 10-Run Win Over SunRisers Hyderabad

Mumbai Indians’ 35-year-old off-spinner Harbhajan Singh yet again showed why he is called a fighter. The feisty cricketer sizzled with the ball, and at times even with the bat, to play a crucial role in his team winning their second IPL crown. Bowling with his usual guile, the ‘Turbanator’ took 2/26 against CSK in Qualifier 1 to take Mumbai to their third final. In the summit clash at the Eden Gardens, he yet again proved to be Chennai’s nemesis, scalping the prized wickets of dangerous opener Dwayne Smith and middle-order mainstay Suresh Raina.

With 18 wickets to his name in IPL-8 and a 19-ball fifty to boast, the selectors did fulfil the man’s ‘burning desire’ to play for India again as he made a comeback to the national Test squad for the Bangladesh tour after more than two years. Yet another ‘oldie’ who has drawn the spotlight is Kolkata Knight Riders’ (KKR) chinaman bowler Brad Hogg. At 44 – the oldest player in IPL history – the Australian made full use of the limited chances he was offered. Besides bamboozling the batsmen, he was also a livewire on the field.

Playing just his second game this season, Hogg took 4/29 to enable KKR canter towards a seven-wicket victory over CSK at home. With nine wickets to his name from six matches, the tweaker earned lavish praise, both from his teammates and rivals for his grit, determination and hard work. CSK all-rounder Dwayne Bravo, who took 26 wickets to win the purple cap, is also no youngster. At 32, the Trinidadian was skipper Mahendra Singh Dhoni’s go-to-man and his knack to pick up wickets at crucial junctures powered the team to their sixth IPL final, although they faltered at the last hurdle losing to Mumbai Indians by 41 runs.

Delhi Daredevils did finish a poor seventh in the standings, but their 36-year-old South African leg-spinner Imran Tahir earned plaudits. Picking up 15 wickets, he contributed significantly in the team’s five victories in 14 games. Well, it’s not the bowlers alone, in the batting department too, the weather-beaten pros have left their mark.

Only four centuries were scored in the latest edition of the cash-rich league and the youngest of the four centurions is Royal Challengers Bangalore’s (RCB) AB de Villiers, who is 31. Arguably the best batsmen in contemporary cricket, the South African skipper notched up 513 runs from 16 matches to be the RCB’s batting mainstay.

RCB opener Gayle, at 36, yet again lived up to the billing of being the world’s most destructive batsman. Besides winning the maximum sixes award with as many as 38 hits over the boundary, the Jamaican cracked his fifth century in IPL, scoring 117 against Kings XI Punjab. Plundering 491 runs this season, he has now 3,199 runs to his name to be third highest run-getter in IPL history.

The other centurions — Shane Watson of Rajasthan Royals and CSK’s big hitting opener Brendon McCullum, both 34, — have defied age to contribute significantly for their respective teams. After going down to Mumbai in the final, CSK skipper Dhoni attributed the absence of McCullum as one of the reasons for his side’s loss.

The opener, who left the tournament to join his New Zealand side for the Test series in England, had scored 436 from 14 outings, giving a solid start in most matches. He may not have lit the stage on fire, but CSK’s 40-year-old Michael Hussey once again justified his nickname — Mr. Cricket. Still fit as a fiddle and a safe fielder, Hussey struck a 46-ball 56 against RCB to shepherd CSK through a tricky chase and take them to their sixth final.