Leave it to time and it will decide. 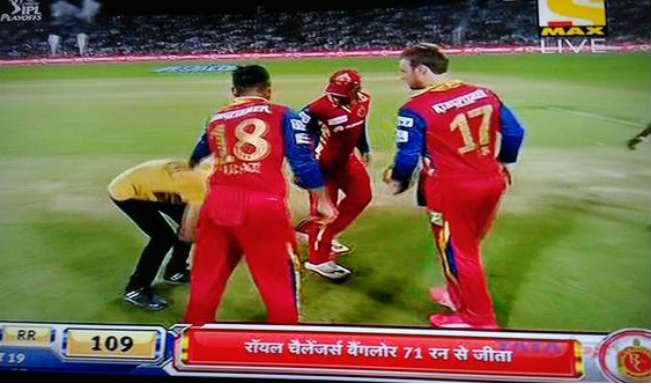 Virat Kohli, the modern day batting maestro who has instilled fear in the minds of opposition bowling unit has often being compared to the all time batting legend Sachin Tendulkar. The younger lad has been touted by the experts as the frontrunner in nearing the big milestones set by the God of cricket. The two superstars of their generations boast of contrasting personalities but both of them enjoy massive fan following in the cricket crazy nation. The latest example of Virat ruling the hearts could be seen by the picture of an excited fan running to touch feet of RCB skipper, during Royal Challengers Bangalore-Rajasthan Royals eliminator clash at the MCA stadium. Also Read - Virat Kohli's Tweet in Marathi For Shardul Thakur Goes Viral, Twitterverse Unnecessarily Trolls Indian Cricket Team Captain

In the battle of Royals at the Maharashtra Cricket Association Stadium in Pune, it was Royal Challengers who emerged victorious against Rajasthan, beating them by massive 71 runs. As the excited RCB players with the likes of Virat Kohli and AB de Villiers were celebrating their victory, an over-enthusiastic fan ran up to Virat Kohli and was seen touching his feet, much to the surprise of Kohli. Also Read - Virat Kohli, Sachin Tendulkar Pay Condolences to Hardik And Krunal Pandya After Father's Demise Due to Cardiac Arrest

Virat Kohli is addressed as the pioneer of new age cricket with the motto being ‘fight fire with fire’ by his supporters. With his growing popularity both for his on and off the field contributions, are we looking at the possibility of him beating the legendary cricketer and all time favourite – Sachin Tendulkar? Only time will tell.