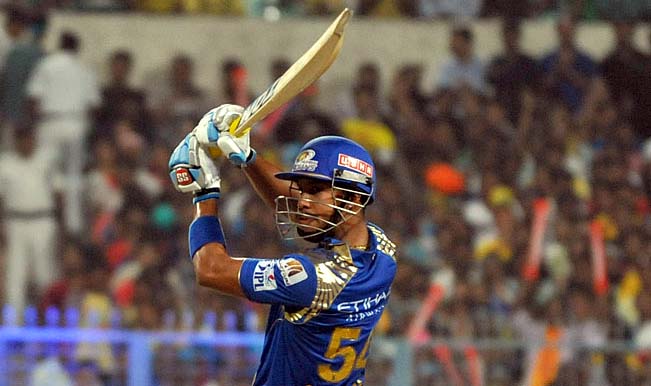 Kolkata, May 25: Mumbai Indians crushed Chennai Super Kings under the weight of a daunting asking rate on Sunday to lift the coveted Indian Premier League title for the second time, in a virtual replay of the final between the two sides in 2013 at the same venue Eden Gardens. Put in to bat, Mumbai gave an awesome batting display to plunder 202/5, and then restricted Chennai to 161/8, finishing with a 41 run victory before a capacity 66,000 plus crowd at the iconic ground. Also Read - Nita Ambani Crashing Quinton De Kock-Nathan Coulter Nile's Interview After Mumbai Indians Win Record-Extending Fifth IPL Title | WATCH

Chasing the tough target, Chennai Super Kings lost an early wicket and never quite seemed like taking up the challenge,virtually choking Aunder pressure as the asking rate kept mounting. In the end, the battle seemed quite one-sided. Two years back, Mumbai had defeated Chennai by 23 runs to annex their maiden title at the Eden. Mumbai now have evened with Chennai and Kolkata Knight Riders – each having been crowned champions twice. Also Read - IPL 2020: IPL 2020: Kagiso Rabada Wins Purple Cap With 30 Wickets. Check Full List

Chennai began their reply on the wrong note, as Mike Hussey (4) departed cheaply, but Dwayne Smith (57; 48b, 9×4, 1×6). and Suresh Raina (28; 19b, 3×4, 1×6) set out to repair the damage and take the battle into the opponent camp with a 66-run second wicket stand. However, veteran office Harbhajan Singh – on a high after his recall to the Indian team – showed the door to Smith, and that proved to be the turning point of the game, as CSK never got going after that.

Wickets tumbled, as Raina became Harbhajan’s victim in the tweaker’s next over, while Dwayne Bravo (9) and skipper M S Dhoni (18) also could not do much. The dye was cast, and once Dhoni went back in the 16th over, with the score reading 124/5, it was all over. For the winners, Mitchell Mcclenaghan (3/25), Lasith Malings (2/25) and Harbhajan Singh (2/34) were the main wicket takers.

Earlier, , the Mumbai Indians built their innings around two partnerships, as they set an asking rate of 10.15 for Chennai on a flat strip. A rollicking 119-run second-wicket stand between opener Lendl Simmons (68; 45b, 8×4, 3×6) and skipper Rohit Sharma (50; 26b, 4×6, 6×2) took the team to a position of solidity after the loss of opener Parthiv Patel in the opening over itself.

Kieron Pollard (36; 18b, 2×4, 3×6) and Ambati Rayudu (36; 24b, 3×6) then forged a 71-run partnership for the fourth wicket off only 40 balls to pile on the Chennai Super Kings bowlers’ misery. Rohit, who has always found Eden a happy hunting ground, went on the offensive from the word go, smacking Mohit Sharma for 16 runs in the second over, before unleashing some exquisite strokes during his stay in the middle.

Caribbean Simmons also played with his characteristic flamboyance, but reached his half century with a somewhat lucky shot, an edge, as Pawan Negi only managed to get his hands to the leather before it slipped out. The batsmen ran two, and Mumbai were 98/1 at the halfway stage. Dwayne Bravo finally broke the partnership by foxing Rohit with a slower ball. Mumbai were 120/3 in 12 overs.

Simmons returned in the very next delivery, yorked by Dwayne Smith. Rayudu then joined Pollard, who belted Nehra for 23 runs in the 17th over, that included three sixes and one boundary. For Chennai, Dwayne Bravo (2 for 36) was the most successful bowler.