In IPL history, Mumbai and Kolkata have played 15 matches with the former winning 10 encounters. 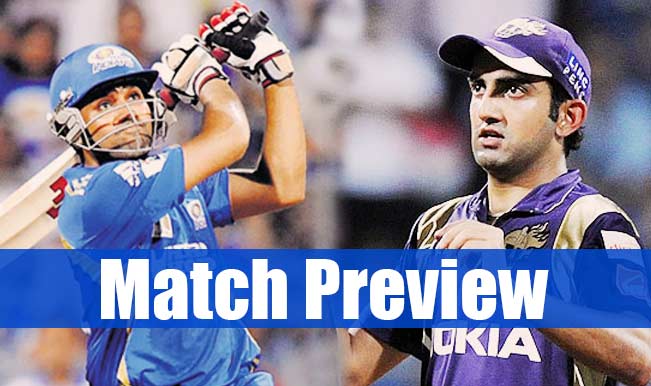 Also Read - Virat Kohli Not a Bad Captain But Rohit Sharma is Better, Difference Between Them is Huge: Gautam Gambhir

Mumbai: Facing a must-win situation to qualify for the play-offs, Mumbai Indians (MI) will have no other option but to go all out to ensure a win against a strong Kolkata Knight Riders (KKR) in the return leg of the Indian Premier League (IPL) encounter at the Wankhede Stadium here on Thursday. As the business end of the tournament approaches, home side Mumbai Indians after their loss to Royal Challengers Bangalore (RCB) on Sunday slumped to sixth position with 12 points from 12 games, needing to win all two remaining games to qualify for the play-offs. Also Check: Updated Points Table of Pepsi IPL 2015. Also Read - India vs Australia 2020: Shubman Gill Looking Forward to The Tour But Hasn't Set Any Personal Goals

Whereas KKR after a consistent run in the season are placed in the second spot with 15 points from 12 games, needing just one point to book their play in the knock-out stage. Both teams earlier met in the opening match of the season on April 8, where home side KKR outplayed Mumbai by seven wickets. Also Read: Day 37 Prediction, Current Points Table and Schedule for upcoming matches of IPL 8. Also Read - BCCI Earned Rs 4,000 Crore From IPL 2020, Viewership Increased by 25 Per Cent

Rohit Sharma-led Mumbai come into the game after a 39-run loss to RCB. Bangalore batsman AB de Villiers played a blistering 59-ball 133 to steer his team to a massive 235/1. It was too big a task for Mumbai to chase as they managed 196 off 20 overs after a late cameo by Kieron Pollard. On the other hand, KKR somehow managed to sneak a one-wicket win against Kings XI Punjab on Saturday. Choosing to bat first, Punjab posted 183 runs on the board but a late assault by KKR’s Andre Russell helped side hold on their winning touch. Also Read: Kieron Pollard, Andre Russell among five key players for MI vs KKR clash.

On Thursday, Mumbai bowlers will have to be in their top form after going for plenty against RCB. Jasprit Bumrah, who replaced R. Vinay Kumar against RCB, and Hardik Pandya, both gave away 50 runs each in their four overs. Mitchell McClenaghan, who was economical in the earlier games also leaked heavy runs. The team will once again be will heavy dependent on pace spearhead Lasith Malinga.

In batting, Mumbai have showed improvement in the opening stand with Lendl Simmons and Parthiv Patel giving the team good start. But their middle order has been inconsistent. Rohit Sharma, Kieron Pollard, Ambati Rayudu will have to come out with healthy contributions against KKR.

Not to forget in-form all-rounder Russell (287 runs from 11 games) and Yusuf Pathan to follow. In terms of bowling, Umesh Yadav’s pace has fetched him nine wickets from 11 games, followed by Russell’s 11 from 11 games and spinner Piyush Chawla’s 11. West Indian Sunil Narine and Australian Brad Hogg have also troubled the batsmen.

They will be boosted by the joining of Bangladeshi all-rounder Shakib al Hasan who missed the earlier part of the Twenty20 tournament due to his national commitments. On Thursday, the title holders will be much more relaxed keeping in mind their position in the table, while the home side will be under pressure either to perform or get knocked out. In IPL history, Mumbai and Kolkata have played 15 matches with the former winning 10 encounters.