KKR and MI are still in a fight to the finish with the Playoffs as their destination for now. 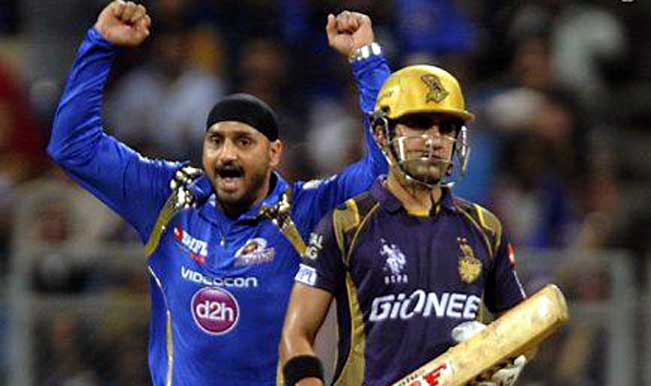 Mumbai, May 14: Yusuf Pathan’s late 52 off 37 went in vain as Mumbai Indians held their nerves till the end to defeat Kolkata Knight Riders by five runs in their Indian Premier League (IPL) encounter at the Wankhede Stadium here on Thursday and keep their play-offs hope alive. With their win, Mumbai Indians climb from sixth spot to fourth spot with 14 points from 13 games, whereas Kolkata remain in second spot with 15 points from 13 games. You can watch full video highlights of Mumbai Indians vs Kolkata Knight Riders match here. Also Read - MI vs KKR Highlights, IPL 2020 Match 32, Abu Dhabi: Quinton De Kock, Rahul Chahar Star as Mumbai Thrash Kolkata by Eight Wickets

But third ball off the fifth over brought fortunes back for Mumbai as Harbhajan Singh got Uthappa (25) caught by Malinga. Incoming batsman Manish Pandey (1) too departed after a direct throw by Lendl Simmons got him run out. Two quick wickets didn’t trouble skipper Gambhir (38 off 29 balls) as he went on scoring five boundaries and sneaking in with couple of quick singles.

But he too fell in the 11th over. Coming down the track again, looking to strike it big, spinner Suchith bowled it flat and yorked Gambhir to take out his leg stump. Kolkata score was 88/3 in 10.6 overs. Shakib Al Hasan also went back to the pavilion after playing a short quick-fire innings off 23 off 15 balls, the score being 118/4 in 14.2 overs. Incoming hard-hitting batsman Andre Russell (2) was also dismissed by Malinga.

Earlier, put into bat, Mumbai Indians got off to a modest start scoring 25 off the first four overs, but lost opener Parthiv Patel (21) in the second ball of the very next over. Patel ran down the track to hit spinner Hasan straight down the ground but ends up flicking it uppishly, which straight landed into the hands of Manish Pandey standing at deep mid wicket. Patel’s opening partner and in-form batsman Simmons (14) too didn’t last long. After hitting pacer Morne Morkel for a six off the previous ball, Morkel banged it in and Simmons failed to uppercut it, and ended up scooping it feebly into the hands of Pandey.

Incoming batsman Ambati Rayudu (2) also didn’t trouble the scorers too much. With the wicket of Rayudu, Mumbai were struggling at 47/3 in 6.3 overs. With wickets tumbling at the other end, skipper Rohit Sharma faced his game positively striking five boundaries in his short innings of 30 off 21 balls. But a beauty from spinner Sunil Narine which Rohit failed to pick in the fourth ball of the 12th over saw the end of Rohit, leaving Mumbai at 79/4 in 11.4 overs.

But a late cameo by Hardik Pandya, 61 not out off 31 balls, with eight boundaries and two sixes and Kieron Pollard 33 not out off 38 balls helped Mumbai post a challenging score. The duo remained unbeaten to pile up 92 runs partnership off 51 balls for the fifth wicket. For Kolkata, Hasan (2/22) was the pick of the bowlers.