Mumbai Indians stayed on course for a play-off berth after pulling off a narrow five-run win over defending champions Kolkata Knight Riders in a nerve-wracking last-over IPL thriller. 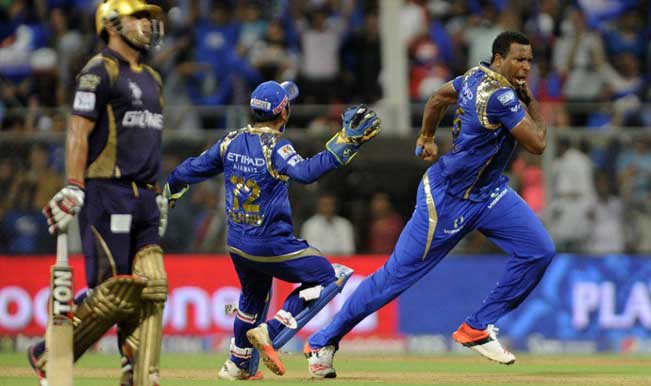 Mumbai, May 14: Mumbai Indians stayed on course for a play-off berth after pulling off a narrow five-run win over defending champions Kolkata Knight Riders in a nerve-wracking last-over IPL thriller here today. The hosts first recovered from a poor start of 79 for four to post 171-4 following a whirlwind knock of 61 not out in 31 balls from Hardik Pandya. Also Read - MI vs KKR Highlights, IPL 2020 Match 32, Abu Dhabi: Quinton De Kock, Rahul Chahar Star as Mumbai Thrash Kolkata by Eight Wickets

Chasing the score, Knight Riders lost wickets at regular intervals after a bright start of 45 but still were in the hunt for a win and a place in the play-off when they needed 12 runs in the last over bowled by Kieron Pollard. However, the big-built West Indian conceded only six runs after taking the wicket of danger man Yusuf Pathan who was caught behind for 52 off the first ball to help Mumbai cross the finish line at the Wankhede Stadium. Also Read - MI vs KKR Dream11 Team Hints And Predictions IPL 2020: Captain, Vice-Captain And Probable XIs For Today's Mumbai Indians vs Kolkata Knight Riders Match 32 at Shiekh Zayed Stadium, Abu Dhabi 7.30 PM IST Friday October 16

MI thus took their points tally to 14 with one last away game left to play against Sun Risers Hyderabad on May 17, while Kolkata have 15 with one match in hand against Rajasthan Royals to be played at the Cricket Club of India’s Brabourne Stadium here on May 16. Earlier Pandya, who came after the fall of captain Rohit Sharma, slammed 2 sixes and 8 fours in his 31-ball whirlwind knock and added an unbroken 92 runs in 51 balls for the fifth wicket with Pollard (33 not out) to resurrect Mumbai after they were reduced to 79-4 in 11.4 overs.

Put into bat, MI were put on the back foot within the power play period when they lost both openers Parthiv Patel (21) and Lendl Simmons (14).
After the rare failure of the consistent Ambati Rayudu that left MI at a difficult 47 for 3, captain Sharma and West Indian Pollard did some repair work but the dismissal of the former for a 21-ball 30 put the brakes again. But Pandya took the KKR bowling by the scruff and smashed the ball around. He struck Umesh Yadav for four fours in the 17th over before reaching his half century with a six in 25 balls.

Former Bangladesh captain Shakib Al Hasan, returning to the tournament after a month’s gap because of national duty, did the star turn for the defending champions with a two-wicket haul for 22 with his crafty left arm spin. South African Morne Morkel (1 for 27) and Narine (1 for 38) were the other wicket takers. Knight Riders conceded 72 runs in the last five overs.