Making his first IPL appearance this season, Watson, who took over the reins from stand-in-skipper Steven Smith, hit 6 fours and 4 sixes to provide perfect entertainment to the Sunday crowd. 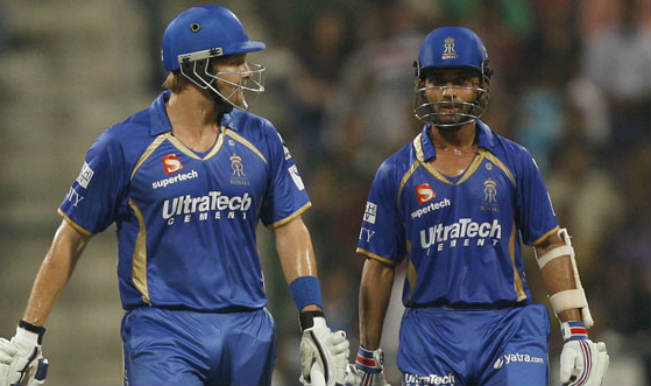 Ahmedabad, Apr 19: A rampaging Rajasthan Royals thrashed Chennai Super Kings by eight wickets as openers Shane Watson and Ajinkya Rahane hit strokeful fifties to help the team register its fifth straight win in this season of the IPL, here today. Chasing 157 for a win at their adopted home ground at Motera, RR rode on a 144-run record opening stand between skipper Watson (73 off 47 balls) and Rahane (76 not out) to canter home in 18.2 overs and hand CSK their first loss in this edition. Also Read - MS Dhoni Gets Slammed For Not Coming up The Order And Negative Mindset During RR vs CSK Dream11 IPL Match in Sharjah

The previous best opening partnership for RR was the 135-run stand between Graeme Smith and Naman Ojha in Durban, South Africa in 2009. After taking stock of the slow-paced wicket in the first 6 overs, Watson cut loose before the strategic time-out to punish the CSK bowlers at will. Making his first IPL appearance this season, Watson, who took over the reins from stand-in-skipper Steven Smith, hit 6 fours and 4 sixes to provide perfect entertainment to the Sunday crowd. Also Read - Rajasthan Royals vs Chennai Super Kings Match 4 Highlights: Steve Smith, Rahul Tewatia Star as Royals Beat Dhoni's CSK by 16 Runs

Rahane, who smashed his second fifty of the season, matched Watson stroke by stroke to accumulate 231 runs in five appearances and get the Orange Cap, for being the leading run-scorer, on his head. Watson was finally done in by a yorker from Ravindra Jadeja as the left-arm spinner got a consolation wicket in the 17th over.

CSK delayed the inevitable by getting another wicket as Smith (6) gave a simple caught and bowled chance to Dwayne Bravo in the 19th over. Karun Nair (1 not out) walked in to hit the winning runs as Rahane savoured the victory at the non-strikers end with his 55-ball stay laced with 6 fours and 2 sixes.

Earlier electing to bat in hot and testing conditions, CSK lost early wickets, but skipper Mahendra Singh Dhoni (31 not out) and Bravo, in his 36-ball knock, stitched an unbeaten 91-run fifth wicket partnership to lift the team to 156 for four in 20 overs. Bravo, who brought up first fifty of the season in just 29 balls, smashed 8 fours and a six while Dhoni played the sheet anchors role but was a tad slow in his 37-ball stay. Dwayne Smith also struck a 29-ball 40 to give the much-needed boost after CSK were in trouble at 39 for three. Check Out: IPL 2015 Schedule – All Match Fixtures and Complete Time Table of IPL.