Dhoni's decision to bat first under sweltering conditions was believed to be correct but his hopes of a strong start were dampened soon. 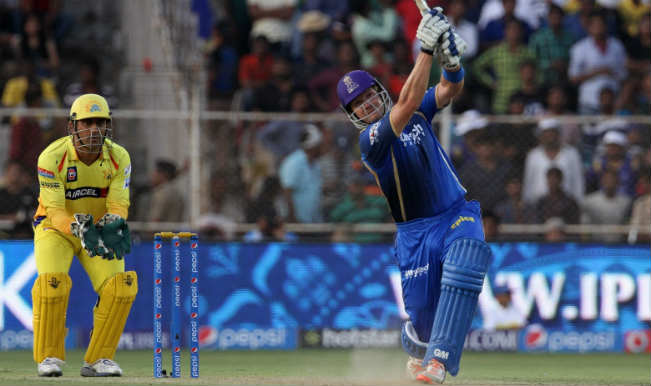 Rajasthan Royals (RR) marched on to their fifth victory of IPL 2015 after they defeated Chennai Super Kings (CSK) by eight wickets at the Sardar Patel Stadium, Ahmedabad. The table toppers of IPL 2015 maintained their winning streak with the second home match win beating the formidable CSK side with an astonishing ease that saw the comeback of Royals regular skipper Shane Watson. You can catch the full video Highlights of RR vs CSK match here on the official website of Star Sports. Also Read - IPL 2020 MATCH HIGHLIGHTS CSK vs RR Match 37: Buttler Slams Fifty as Rajasthan Beat Chennai by 7 Wickets

Chasing a 157-run target for victory, Royals didn’t blink even once with the experienced opening pair thrashing the hapless CSK bowlers, putting on a 144-run opening partnership, to stroll to the target with 10 balls to spare. With the comfortable victory, Royals maintained their 100 percent win-record in the campaign, perched at the top of the standings with a maximum 10 points from five games. Also Read - IPL 2020, CSK vs RR in Abu Dhabi: Predicted Playing XIs, Pitch Report, Toss Timing, Squads, Weather Forecast For Match 37

Chennai remained just a rung below Royals with six points from four matches. Royals captain Watson recovered to play his first game of this year’s IPL after missing four matches with a hip injury. And he looked in no discomfort whatsoever, carting the CSK bowlers all over the ground, hitting six boundaries and four sixes. Rahane was also in no mood to play the sheet anchor role as he was equally aggressive — six fours and two sixes — to give CSK a royal hiding.

Earlier, CSK captain Mahendra Singh Dhoni won the toss and chose to bat, with his team posting a fighting total of 156/4. Dhoni’s decision to bat first under sweltering conditions was believed to be correct but his hopes of a strong start were dampened soon. Royals bowlers were disciplined and kept a tight leash on the CSK batsmen. inputs from IANS.