Find out the key players as Rajasthan Royals (RR) and Royal Challengers Bangalore (RCB) face off in match 22 of IPL 2015. 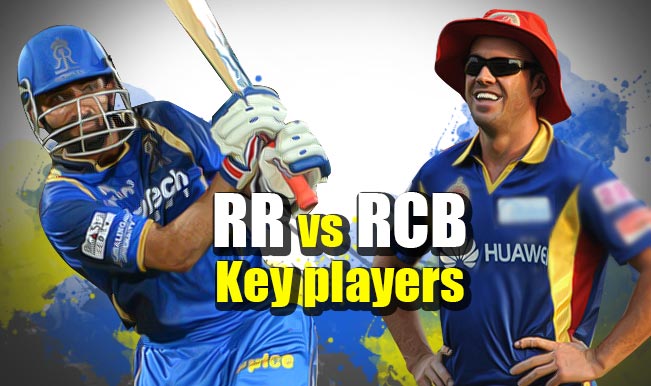 It is the battle of two teams enjoying and enduring opposite fortunes in the Indian Premier League (IPL) 2015 till day 17 as Rajasthan Royals take on Royal Challengers Bangalore at the Sardar Patel Stadium on Friday. Shane Watson’s side, with just one defeat in six matches, top the IPL 8 points table and are well on track to make the play-offs for the third time in the tournament. On the other hand, Virat Kohli and co have looked a shadow of themselves, as they sit second from bottom in the points table. Boasting the likes of Chris Gayle, AB De Villiers and Virat Kohli in the side, one would expect more from the Bengaluru outfit. However, RCB have managed just one victory in four matches. RR vs RCB is expected to be a high scoring match. An entertaining clash can be expected at Motera due to the presence of game changers in the two sides. Here we take a look at the five stars, who will take the field in this match. IPL 2015 Day 17: Today’s Prediction, Current Points Table and Schedule for upcoming matches of IPL 8. Also Read - IPL 2020: Devdutt Padikkal Praises RCB Skipper Virat Kohli, Says 'Truly Enjoyed Every Minute I Spent With Him'

AB de Villiers: What can you call a batsman who smashes a yorker for a six over the keepers head? The answer well is God or AB de Villiers! With the kind of talent and shot-making that the South African possesses, one wonders if he is a Superman. The 31-year-old has played some good cameos for the Royal Challengers this season but one feels that he has not been given the time to settle down and make a mockery of rival bowlers. His Innings against Mumbai Indians promised something big, but the increasing pressure of the scoreboard got to him. If RCB want a match-winner, they will have to push him above Dinesh Karthik in the batting line-up. Also Read - Suryakumar Yadav Reveals How Rohit Sharma's Words Helped Him After Australia Snub

Mitchell Starc: The left-arm pacer is currently the best limited overs bowler in the world. He can swing the ball at the start of the innings and has the ability to deliver yorkers which even Mumbai Indians’ Lasith Malinga would be proud off. The 25-year-old Australian bowled well in the opening game of the season against KKR. He showed his worth during the closing stages of the innings as he gave away just four runs in the last over of the innings. If RCB aspire to change their fortunes this season, Mitchell Starc will have to play key role in their plans. IPL 2015 Match 22 Preview: Leaders RR look to pile more misery on RCB.

Shane Watson: Watson has managed to surprise everyone with the kind of performances he has delivered this season. Missing out on the first four matches due to injury, he came back with a vital 74 against the Chennai Super Kings to guide his team to a fifth straight win on the bounce. The 33-year-old is a key player at the top of the order wherein he can provide the impetus that is needed for a big score. With the ability to decide the outcome of a match with the ball too, RCB will have to find a way to negate the RR skipper if they want to avoid falling to the bottom of the table once again.

Ajinkya Rahane: Rahane is the man of the moment IPL 8. He dons the orange cap having scored 310 runs and has delivered consistently, barring the first game against Kings XI Punjab. With a partner like Watson at the other end, he gets adequate time to settle down and explode as he has done so in the last five matches. The 26-year-old batsman will also be responsible for negating the swing early on with Mitchell Starc looking to break through the RR top order. Click here to check the points table if IPL 8.

Deepak Hooda: The 20-year-old has forced the spotlight to be adjusted and has swayed the world with his aggressive stroke play. When you see him bat, you get a feeling that the ability to smashes sixes comes innately. While the youngster aspires to play the role of Kevin Pietersen in the Indian team in the future, one can clearly see that the signs look extremely promising. With a destructive ability to finish an innings on a high, Deepak Hooda has been a welcome find in the Royals Line up this season.  Check Out: IPL 2015 Schedule – All Match Fixtures and Complete Time Table of IPL.