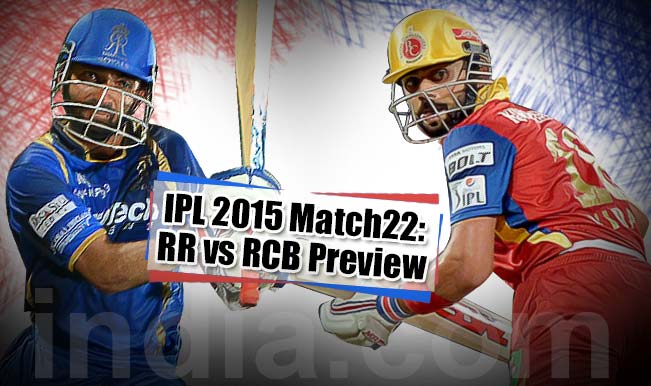 Ahmedabad: Pushed close to the penultimate place after three successive losses, it would take an extraordinary performance from Royal Challengers Bangalore to get the better of table-toppers Rajasthan Royals when the two sides clash in an IPL match at on Friday. With five wins from six matches, Rajasthan are sitting pretty at the top with 10 points, their only loss coming against Kings XI Punjab in which they were beaten in the eliminator after a tie. Also Read - India vs Australia 2020, 1st T20I: Sanju Samson Trends on Twitter After Making it to India Playing XI

RCB, in contrast, are lying second from bottom with three losses from four matches, their only win coming against defending champions Kolkata Knight Riders in their tournament-opener. Nothing seems to be clicking for RCB so far despite having perhaps the most explosive line-up of batsmen on paper. Virat Kohli, Chris Gayle, A B de Villiers, Rilee Rossouw have proven records of striking mortal fear into opposition attacks but for reasons unknown, have failed to fire big so far in the tournament. Also Read - Virat Kohli Responds to Harry Kane on Asking Him For a Place in RCB

Although Kohli and de Villiers have not done too badly, Gayle’s form has been huge letdown and he sat out of the team’s previous match against Chennai Super Kings. The West Indian marauder is enduring a nightmarish IPL by his standards and will have to rediscover his destructive best quickly for RCB to stay afloat. Also Read - IPL 2020: Devdutt Padikkal Praises RCB Skipper Virat Kohli, Says 'Truly Enjoyed Every Minute I Spent With Him'

The team’s bowling is also yet to produce a noteworthy effort despite being spearheaded by World Cup’s Man of the Tournament Mitchell Starc. Rajasthan, on the other hand, have been rolling along smoothly from the first match. Their batting has a settled look with Ajinkya Rahane and Shane Watson combining well in the opening slots.

The middle order has the rock solid Steve Smith to anchor the innings but the loss to Kings XI Punjab in the previous match did expose some bowling frailties of the side.Despite having 191 runs on the board, the Rajasthan bowlers lost the plot after midway and the likes of Stuart Binny and James  Faulkner will have to guard against such slip-ups. However, given their campaign so far, Rajasthan will start outright favourites against RCB.