Rohit led from the front in the final of IPL against Chennai Super Kings, scoring a half-century 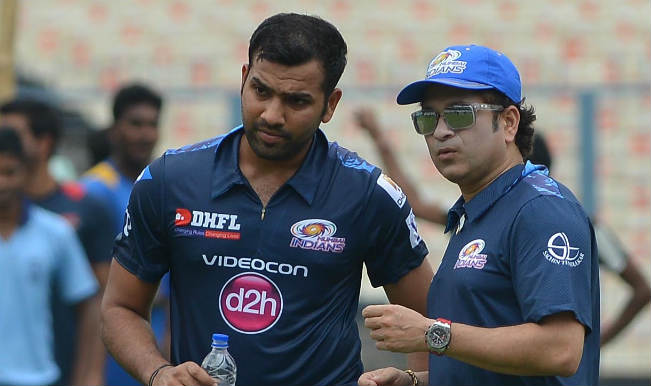 Kolkata, May 25: Former cricketer and Mumbai Indians icon Sachin Tendulkar has heaped praise on the Indian Premier League (IPL) champion team’s skipper Rohit Sharma, saying that he has grown as a leader over the years. “If you compare him today with what he was when he started out as Mumbai Indians captain, he is a far better captain today. He is much more confident now. He has gone through a lot of ups and downs as MI’s captain and has faced a lot of challenges. These challenges only make you a better cricketer and a tougher person,” Tendulkar said. Also Read - Will Rohit Sharma Score Runs in England? Former India Wicketkeeper Answers

Rohit led from the front in the final of IPL against Chennai Super Kings, scoring a half-century and putting on 119 runs with Lendl Simmons (68) to help Mumbai Indians post a massive 202 for five, and eventually win the trophy with a 41-run victory. “I think his execution has been particularly good this season. Whatever we planned in the meetings and dressing room, he has been able to execute them very well. You can tell a lot about the captain from the feedback the bowlers give you. The bowlers bowl in the areas and execute the plans that the captain asks them to,” Tendulkar told ‘iplt20.Com’. Also Read- Champions Mumbai Indians celebrate at Wankhede Stadium amid huge fan support. Also Read - Former BCCI President Reveals Why Rahul Dravid Decided to Step Down From Captaincy

“We can plan many things behind closed doors but it is up to the captain, the bowlers and the fielders to bring it all together. Rohit has done that well,” he insisted. Tendulkar termed Mumbai Indians’ amazing turnaround this season, after four straight losses, as “fantastic!”. “We had a difficult start, really tough one. But those are the testing moments. That’s when the team stuck together and we worked hard. This victory is not a coincidence; it is the reflection of all the hard work that we have put in,” said the legendary batsman. “All of us truly believed that we could change things around. It is not how you start but how you finish that matters,” he added.

The 42-year-old legendary batsman said his team never lost the faith and belief even when they were losing back-to-back matches. “What stood out for me was the belief and faith we had in our ability. At no stage any player was ready to put his head down thinking this is a difficult season and there is no future for us. We always saw the light at the end of the tunnel,” Tendulkar said.

The retired Indian batsman said former Australia captain Ricky Ponting, who currently coaches Mumbai Indians, still has the same approach to the game as in his playing days. “When we played against him, he always came across as a serious, fearless competitor who never wanted to give up. The same applied here. At no stage did he feel that we are out of the tournament. We need positive people with good experience around, and Ricky doesn’t lack in any of those departments.”

Applauding Simmons, who seems to have solved the opening conundrum for Mumbai Indians, Tendulkar said, “I thought he batted beautifully throughout the tournament. He has been very consistent. I also felt that the other players played really well around him. He was the anchor of our team and because of him all the other players had the freedom to go and express themselves.”

Asked which Mumbai Indians players were the find of this edition of IPL, Tendulkar said: “Some of the guys that played for MI for the first time this season did extremely well for us. The likes of J Suchith and Hardik Pandya were very impressive. Also, Vinay Kumar — I know he is an experienced campaigner, but this was his first year for Mumbai Indians. “I thought he didn’t start out very convincingly but he finished brilliantly. He peaked at the right time,” he concluded.