Royal Challengers Bangalore vs Rajasthan Royals Prediction: Results of all RCB vs RR matches played in IPL so far

Both the teams have managed to win 7 games each while 2 matches have been abandoned due to rain. 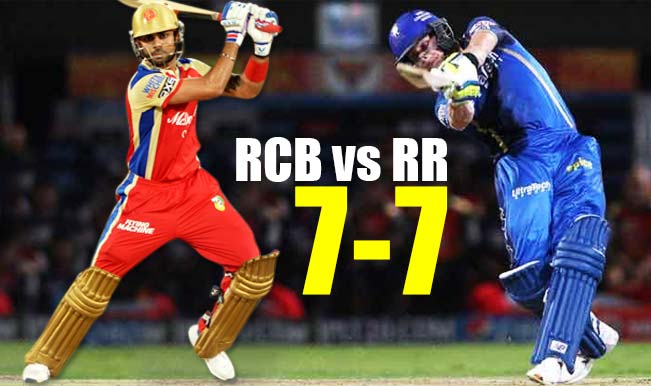 Rajasthan Royals (RR) and Royal Challengers Bangalore (RCB), the two teams that will be facing each in the first eliminator of IPL 2015 at the MCA stadium in Pune will be taking on each other in the play offs of the IPL for the first time in the history of the Tournament. They have faced each other 16 times in the past and the overall head-to-head record has been even between the two sides. Both the teams have managed to win 7 games each while 2 matches have been abandoned due to rain. One can definitely predict the next match to be an even-steven. Also Read: IPL 2015 Eliminator Preview – RCB favorites against RR. Also Read - IPL 2021: Rajasthan Royals Appoint Kumar Sangakkara as Director of Cricket

The biggest margin of victory ever between the two sides in terms of runs came in the year 2008 when Rajasthan royals defeated a struggling Royal Challengers Bangalore in the first season of the IPL by 65 runs. The biggest margin of victory in terms of wickets came when RCB beat the Royals by 10 wickets in the year 2010 with the help of an all round performance by the legendary Jacques Kallis. Also Read: Virat Kohli, Shane Watson among five key players in RCB vs RR clash. Also Read - KKR vs RCB: Gautam Gambhir Points Out Difference Between the Two IPL Heavyweights

It has always been a tough competition between the two sides and if their past record is anything to go by, this match can either be heart wrenching thriller or a stale one sided affair. The best match or what you can call as the greatest match played between the two sides came in the 2014 season when Rajasthan Royals chased down a target of 191 runs set by RCB with the help of an outstanding effort form Steve Smith and James Faulkner.

Royal Challengers Bangalore vs Rajasthan Royals: Results of all RCB vs RR matches played in IPL so far

The best batting performance between the two sides has come from the bat of Ajinkya Rahane when he scored a match winning 103 of 60 deliveries in 2012. The best bowling performance has come from the legendary leg spinner Anil Kumble when he took 5/5 in a game that saw the royals being bowled out for just 55 runs, the lowest score ever between these two sides and the IPL. The lowest score ever for RCB against the Royals came in the 2014 season where they were famously bowled out for just 70 runs in 15 overs after a major batting order collapse that featured the likes of AB De Villiers, Virat Kohli, Chris Gayle and Yuvraj Singh.

Although the battle between the two teams this season slightly favors the Bangalore based franchise, Royals too would be favoring their chances after their strong performance against the Kolkata Knight Riders. It will be a cracker-jacker of a contest and an end to the campaign of one of these two teams. It will be worth seeing which one of these two teams lives up to the expectations set by the fans and move ahead to Ranchi for the 2nd eliminator against the Chennai Super Kings.