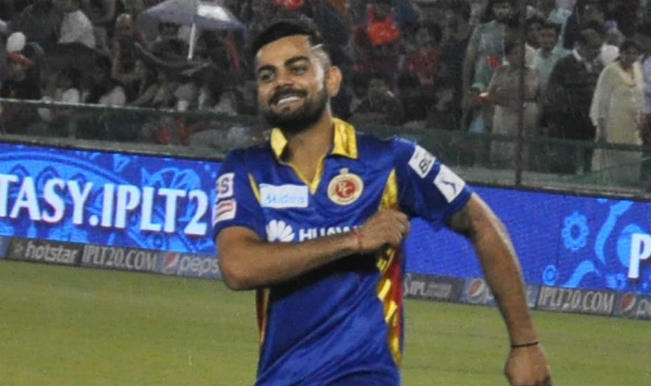 New Delhi, May 21: Indian cricket’s pin-up boy and Test skipper Virat Kohli has been rated as the world’s sixth most marketable athlete. Kohli, currently leading Royal Challengers Bangalore (RCB) in the Indian Premier League (IPL), is on the list of 50 athletes, who have been identified as commercially the most viable sportspersons, by SportsPro magazine on Thursday. Also Read- Is Virat Kohli new Sachin Tendulkar? See pic of crazy fan touching feet of RCB Skipper. Also Read - IPL 2021 Mini Player Auction to be Held in Chennai on February 18

Neymar is a two-time topper of the list, having taken the position in 2012 and 2013. Japanese tennis player Kei Nishikori was the highest new entry on the list at the eighth place. Formula One racer Lewis Hamilton topped the list a year ago, but dropped to the fifth spot in this year’s rankings. Olympic sprint champion Usain Bolt headed the list in 2011 but has dropped to the 10th spot this year. Also Read- As per new IPL rules, CSK & RCB could lose captains, MS Dhoni and Virat Kohli respectively.

The list focuses on marketing potential over the next three years, with athletes from around the world ranked against criteria including age, home market, charisma, willingness to be marketed and crossover appeal. “As ever, these rankings are not about pinpointing the most commercially valuable athlete in the world today, but rather they are an attempt to identify marketing potential over the next three years,” James Emmett, SportsPro editorial director said in a statement on Thursday.

“Eugenie Bouchard has struggled on the court since a standout season in 2014. But she has time on her side, and all the attributes needed to succeed Maria Sharapova and Serena Williams as the face of the most commercially successful women’s sport on the planet.”

“There is debate every year about who does and doesn’t make the list. Our underlying mission is always in identifying athlete marketing bets for the mid-term future. In other words, if you were a sponsor, which athletes are going to provide value for your marketing money, and help build your brand over the next three years” We’re finding the commercial stars of tomorrow, and they are not necessarily the commercial stars of today,” he added.