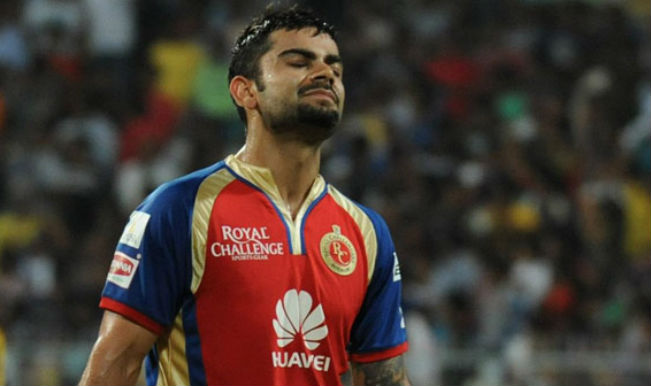 In the IPL 2015 eliminator, Dhawal Kulkarni struck in back-to-back overs to leave Royal Challengers Bangalore (RCB) in hapless condition as he removed opponent’s fiery skipper Virat Kohli. At the score of 46, Rajasthan Royals pacer sent both RCB openers back in the shade. After getting Gayle bowled, Kulkarni took a brilliant catch on his own bowling to get rid of Virat Kohli at the score of 46/2 in 7.3 overs. Kohli scored mere 12 runs in 18 deliveries that consisted of no boundaries, clear indication of heavy nerves in a big match played at Maharashtra Cricket Association Stadium, Pune. Watch the full highlights of the fall of wicket on the official website of Star Sports i.e. starsports.com here. Also Read - Pakistani Channel Heavily Trolled For Presenting Imran Khan's Twitter Poll Victory Over Virat Kohli as Breaking News

Royal Challengers Bangalore lost their first wicket in form of the dangerous West Indian batsman Chris Gayle at the score of 41 in the sixth over playing the eliminator of IPL 2015 played at Maharashtra Cricket Association Stadium, Pune. Gayle who survived the direct hit earlier in the innings could not get past Dhawal Kulkarni. Gayle charged down the wicket and missed the straight delivery that knocked the middle stumps.  Also Catch: Royal Challengers Bangalore vs Rajasthan Royals Live IPL 2015 Cricket Score Updates. Also Read - Anushka Sharma-Virat Kohli Send Special Gifts to Paparazzi Requesting Them to Not Click Their Daughter

Earlier, Royal Challengers Bangalore (RCB) won the toss and opted to bat against Rajasthan Royals (RR) in the eliminator of Indian Premier League (IPL) 2015. Despite the covering of grass on pitch Royal Challengers captain looked confident to bat first. RCB made one change- Sreenath Aravind comes in place of Ashok Dinda. Royals skipper Steven Smith during the toss said he believes his side can restrict RCB to a certain total and then chase down. RR have made one change as well.  Ankit Sharma comes in for Brainder Sran.

Here is a look at playing XI of both the sides-