Another Pakistan Airlines Balloon Recovered in Jammu and Kashmir

A similar balloon designed like a PIA plane was recovered by J&K police last week.

Kathua (Jammu and Kashmir): An aircraft-shaped balloon with PIA (Pakistan International Airlines) written on it, that fell in Jammu’s Bhalwal area was recovered by J&K Police on Tuesday.Also Read - Rajasthan: Army Jawan, Honey-Trapped on Facebook, Arrested For Leaking Confidential Info to Pakistan

A similar balloon designed like a PIA plane was recovered by police last week on March 9, after it landed in Sotra Chak village of Hiranagar sector. Also Read - Terrorist Killed in Encounter in Jammu and Kashmir's Shopian, Operation Underway

Locals saw the balloon in Sotra Chak village and informed the police. Also Read - Jammu And Kashmir: 1 Militant Killed After Encounter Breaks Out at Tujjar Area of Sopore

On receiving the information, the Rajbagh police team reached the spot and seized the balloon.

The matter was under police investigation. 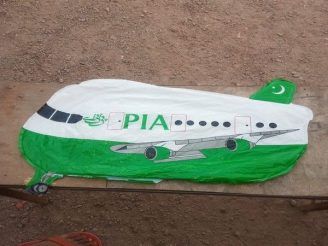