Bengaluru: The maiden run of the train from the Bengaluru City Railway Station to the Kempegowda International Airport started on Monday, much to the delight of commuters demanding the facility for over a decade. Train service would mean people of Bengaluru who now have to spend anything between ₹1000 to ₹ 1500 for travelling in a taxi, would now have an affordable option. The train would be run only six days a week with no service on Sunday as for now. The fare would be Rs 15 from the city to the airport. Until now, people had been spending Rs 270 to travel by Vayuvajra, the special air-conditioned bus of the state-owned Bangalore Metropolitan Transport Corporation.Also Read - Infinix Inbook X1, Inbook X1 Pro Launched In India At Rs.35,999, Checkout Key Features And Specs Here | Watch

Karnataka Chief Minister B S Yediyurappa joined many others to greet people on the occasion.
“Starting today, Bengalureans can take a train to the Kempegowda International Airport, Devanahalli station. The trains will operate from Bengaluru city station to the newly built KIA, Devanahalli Railway halt station,” the Chief Minister tweeted. 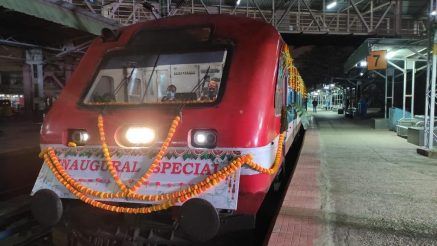 According to the Divisional Railway Manager (DRM) of Bengaluru Ashok Kumar Verma, the train started at 4.45 am.

Various citizen groups had been demanding to improve mobility and a hassle-free journey from the city to the airport at an affordable cost. 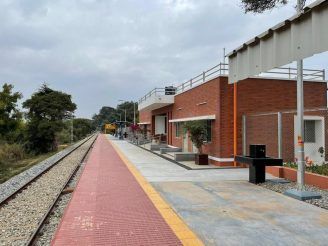 3 DEMU Services to run for now

According to the South Western Railway, three pairs of DEMU services would be introduced in the section from today. The services would continue until further announcements, it said in a release on Sunday, adding that in addition to three DEMUs, Bengaluru Cantonment Bangarpet Yesvantpur DEMU and Yesvantpur Bangarpet KSR Bengaluru DEMU would run via KIAD Railway Station with a stoppage at KIAD.

Stating that Bengaluru International Airport Limited and South Western Railway have partnered to establish a Railway halt station near Kempegowda International Airport, it said in a tweet that this synergy would offer hassle-free, quick, environment-friendly commute to the airport and is bound to benefit thousands of passengers daily.

With this rail service, one can spend a maximum of 45 minutes to reach the airport from Bengaluru city.