Private hospitals have also been directed to take similar steps to prevent the crowding and halt the spread of COVID-19.

Bengaluru: The Karnataka government on Saturday issued an order, restricting ‘not-so-serious’ patients to visit hospitals as Covid cases surge in the state. The government said only sick patients requiring emergency care may visit hospitals and autonomous institutions. All other patients with mild illness shouldn’t visit hospitals for the next 2 weeks or until further orders to prevent crowding, it said.

Private hospitals have also been directed to take similar steps to prevent the crowding and halt the spread of COVID-19. Karnataka on Friday reported 28,723 new cases of COVID, including 20,121 in Bengaluru, as it recorded the highest number of tests since the beginning of the pandemic at over two lakh. There were 14 new fatalities (Bengaluru – seven), the Health Department said in a bulletin. 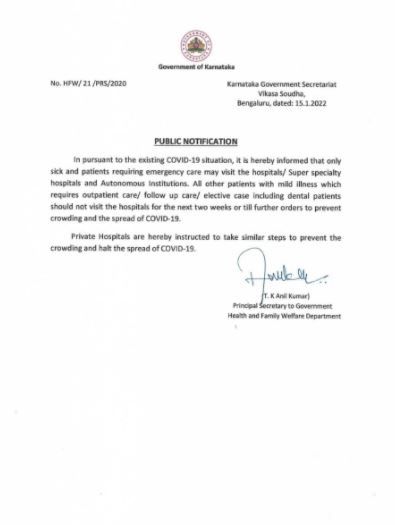 “Highest testing since the beginning of pandemic with 2.21 lakh tests today,” State Health and Medical Education Minister K Sudhakar tweeted on Friday. “Case load of Bengaluru, which accounted for about 75% of the case load of the State for the last two weeks, falls below 68% as cases in districts rise,” he said.