Karnataka Lockdown Guidelines: In fresh guidelines, the Karnataka govt said the marriage functions are permitted with not more than 200 people in open spaces and 100 people in closed places.

Karnataka Lockdown News Today: In an effort to keep a check on Omicron and coronavirus cases, the Karnataka government on Tuesday night imposed additional containment measures and banned all kinds of rallies, dharnas and protests across the state. Issuing new guidelines, the state government said that the marriage functions will be held with not more than 200 people in open spaces and 100 people in closed places. However, the state government intensified the surveillance at the borders of Maharashtra, Kerala and Goa.

“All rallies, dharnas, protests prohibited. Marriage functions are permitted with not more than 200 people in open spaces and 100 people in closed places. Intensive surveillance to be conducted at border of Maharashtra, Kerala and Goa,” the state government said in the fresh order.

As per the guidelines, the state government said that the public transport including BMRCL shall operate as per the seating capacity.

The state government further added that the BBMP chief commissioner and deputy commissioners of the districts may impose additional measures based on their assessment of the situation. 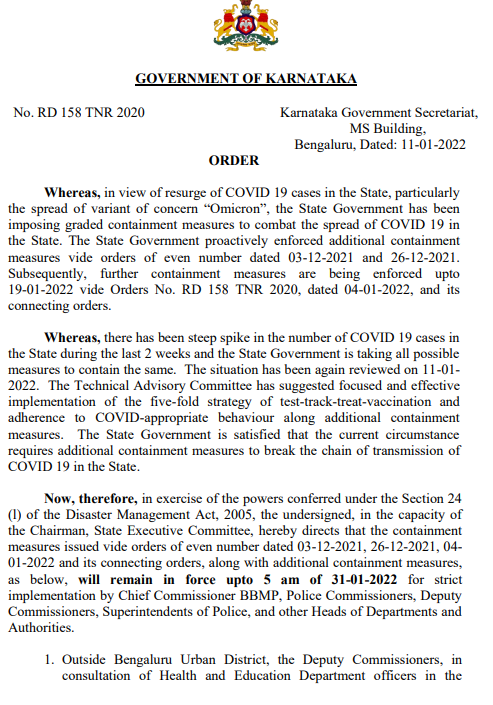 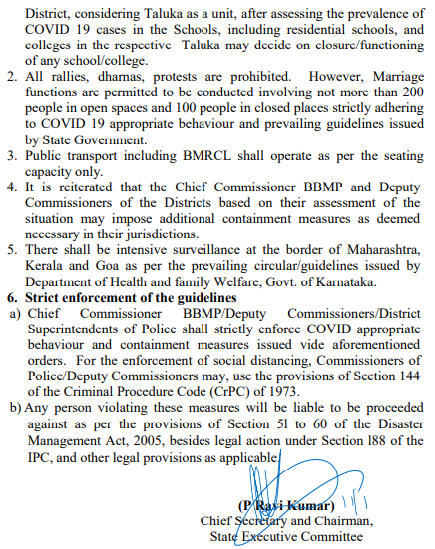 The development comes a day after Chief Minister Basavaraj Bommai ruled out easing restrictions at places with less positivity rate. He instead stressed the need to take extra precautions.

“No…what I had said is that depending on the COVID spread we will take a decision. Now you are seeing, yesterday there were 12,000 cases in the state, nearly 9,000 were only in Bengaluru. Positivity rate in the state is at 6.8 per cent, in Bengaluru it is 10 per cent, in the whole country we are in third place,” Bommai had said on Monday.

After the cabinet meeting last week, Law and Parliamentary Affairs Minister J C Madhuswamy had said that with plans to relax COVID restrictions at places with less positivity rate, the government is likely to review the containment measures announced by it by January 14 or 15.

It must be noted that the Karnataka government had on January 4 imposed curfew on weekends and restricted public gatherings to fight the third wave of COVID-19, till January 19. It has also decided to continue the night curfew for two more weeks, and has prohibited all rallies, dharnas, protests, among others.

Corona cases: Notably, Karnataka on Tuesday registered over 14,000 fresh cases of COVID-19 and five fatalities, taking the tally to 30,78,129 and the death toll to 38,379. The state that has been witnessing a steady surge in cases since the last week of December, today reported 14,473 daily cases, compared to 11,698 on Monday.

Of the new cases on Tuesday, 10,800 were from Bengaluru Urban that saw 840 people being discharged and 3 deaths. The total number of active cases across the state is now 73,260.